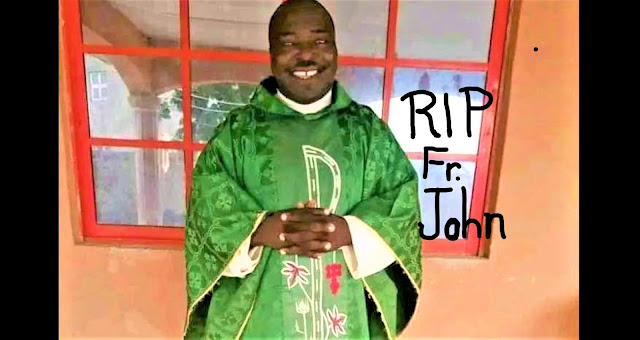 Another Catholic priest has been killed by terrorists in Kaduna State, Nigeria, Africa. Rev Fr. John Mark Cheitnum, age 44, who was abducted last on July 15th with his colleague. A statement on Tuesday by the Chancellor, Catholic Diocese of Kafanchan, Rev. Fr. Emmanuel Uchechukwu Okolo, confirmed the death stating that the remains of the Priest were discovered today. The statement reads; “sequel to the announcement of the two kidnapped priests from our diocese, it is with a deep sense of sorrow and pains that the Bishop, Clergy, Religious and Laity of the Diocese of Kafanchan announce the gruesome murder of Very Rev. Fr. John Mark Cheitnum. According to reports he was well liked and always smiling. 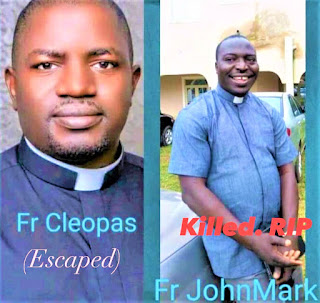 “However, we wish to announce that Rev. Fr. Donatus Cleophas escaped from his abductors and has been reunited with us. “Fr. John Mark who was abducted from the rectory of Christ the King Parish Yadin Garu, Lere L.G.A of Kaduna State, was brutally killed by his abductors on the same day of his abduction; Friday 15th July 2022. “His corpse was later discovered already decomposing on Tuesday 19th July 2022. “Until his demise, he was the CAN Chairman, Jama’a LGA and the coordinating chairman of Christian Association of Nigeria (CAN), Southern Kaduna. He was the Dean of Kwoi Deanery, Director of Communications in the Diocese of Kafanchan and the Priest of St. James Parish Fori, Jama’a LGA, Kaduna State “His burial is slated for Thursday, 21 July 2022 at the Cathedral of St. Peter Kafanchan, Kaduna State." 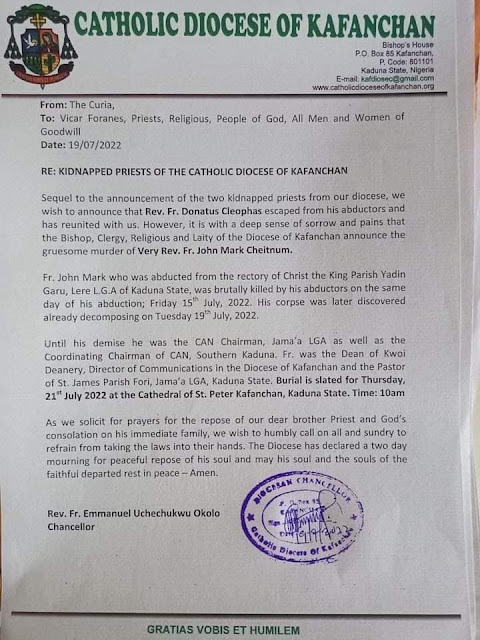 David Carr said…
Lord, I pray for all who mourn the tragic loss of Fr. John Mark. Thank you for the faith you instilled in him. I also pray for those who kidnapped and killed him. May they turn from evil and darkness and run to you, Jesus. Lord we trust and hope in your promises (Romans 8:28) that while there is sin in the world you have overcome it all to bring us into everlasting life. Amen.
July 22, 2022 at 10:38 AM