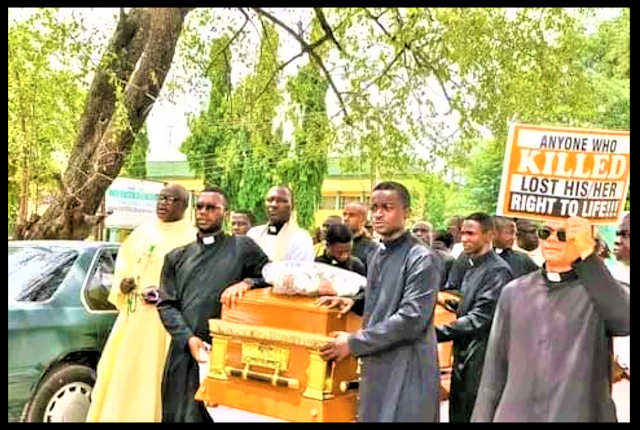 Over 700 Nigerian priests peacefully protested at the funeral of the priest killed in Kaduna.
Some of the signs read: "We are priests, not terrorists!" "the government should protect Nigerians", "justice must be served", "do we still have a government?".
Fides reports that several of the hundred of priests (according to the local press more than 700)  came from all over Nigeria to celebrate the funeral of Fr. Vitus Borogo killed on June 25, in Kaduna Prison Farm.
In his homily, the Archbishop of Kaduna, His Exc. Msgr. Matthew Man-oso Ndagoso, deplored the growing instability in the country and stressed that Nigerians live in constant fear of being victims of violent acts, while the federal government seems to be unable to address the issue. For Msgr. Ndagoso, Nigerians are being held prisoner in their own country because of persistent attacks and killings. The Archbishop of Kaduna expressed his pain at the fact that in a year his community has buried three priests who died in the hands of bandits, adding that the most painful one was the of the late Rev. Father Aketeh Bako whose burial took place last three weeks without his corpse, which has not yet been found .
"Over my 60 years of age, we have not seen it this bad as it is now. Even during the civil war, it was not bad as it is now. Something is wrong with leadership of this country", said Mgr. Ndagoso. "We no longer have tears in our eyes because the source of our tears have dried up because of constant crying. We have also lost our voices because when you talk, nobody listens. You cry, nobody hears your cry but we will not loose hope. One day, God will wipe our tears". Msgr. Ndagoso appealed to the state police to guarantee the safety of citizens because those who have the obligation to protect people's lives and property have stopped doing so. Fr. Borogo was killed on June 25, while his brother, CY Borogo, was kidnapped by the criminals who attacked the Prison Farm. On Sunday June 26, another priest was killed in an attempted kidnapping. Fr. Christopher Odia, parish priest of St. Michael Catholic Church, Ikabigbo, as well as headmaster of St. Philip Catholic Secondary School, in Jattu, was killed in a fire fight with the police after he was kidnapped by some bandits on his way to celebrate mass in Auchi, in the state of Edo. A police spokesperson said the kidnappers shot and killed the priest as police came to his rescue. One of the kidnappers was also killed during the rescue operation while other gang members sustained gunshot wounds.
The only positive note is the release, on June 30, of Fr. Christopher Itopa Onotu, kidnapped on June 4 (see Fides, 7/6/2022), as confirmed by the diocese of Lokoja.
Source: Fides.org