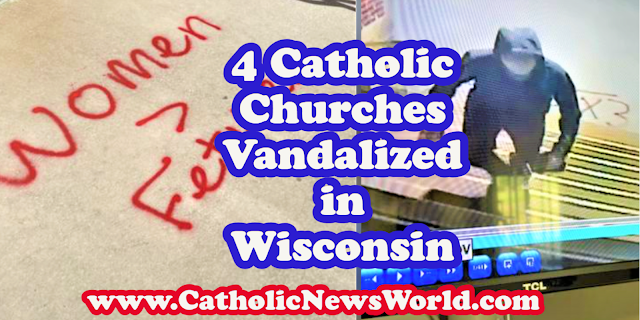 In Wisconsin, USA, the Chippewa Falls Police Department has identified a possible person connected to a wave of vandalisms at local Catholic churches. The entrance doors of the churches, as well as the sidewalks outside the buildings were vandalized with graffiti.
However, no arrests have been made, said Police Lt. Brian Micolichek on July 5th, 2022.
The person is reported to be a local.
Graffiti was painted outside of four Catholic churches on June 30, 2022. Holy Ghost Parish, St. Charles Catholic Church and Notre Dame Catholic Church in Chippewa Falls city and St. Peter’s Catholic Church in the town of Tilden, Micolichek said.

Micolichek said the color and writings were identical in all four sites, so he thinks the incidents are linked.
The preliminary investigations reveals that the suspect(s) may be retaliating due to the U.S. Supreme Court’s ruling that overturned Roe vs. Wade.
Father Brandon Guenther of Notre Dame Catholic Church released the following in a statement about the vandalism.
“We continue to pray for women in crisis pregnancies, the unborn, and the conversion of all hearts to the Sacred Heart of Jesus that they may acknowledge the dignity of life from a natural birth to a natural death,” Guenther wrote. “We pray also for an end to violence and vandalism and a return to civil discourse, taking always Jesus’ own fearless proclamation of the Kingdom as our model. We also hope and believe that this is an isolated incident. We trust that we live in a safe community dedicated, by in large, to the ideals of the Gospel. The outpouring of concern and encouragement is a testament to that. We are very touched and grateful for everyone’s support.”
Anyone who has information about the incident should contact the Chippewa Falls Police Department at 715-723-4424.
Sources: https://www.yahoo.com/now/police-identify-person-interest-church-092000389.html and https://www.leadertelegram.com/