#BreakingNews President's Residence Broken into by Thousands of Protestors in Colombo 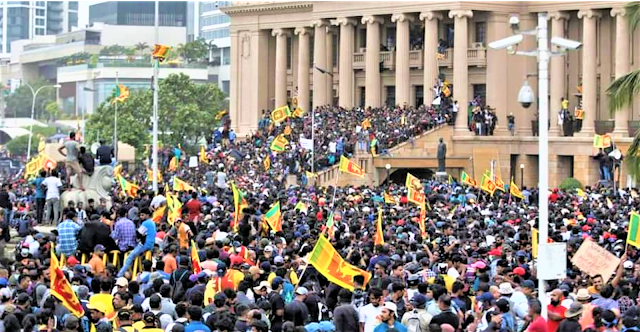 In Sri Lanka, the president fled the palace after thousands stormed the grounds, after protesting the economic crisis for months. Yesterday the police had imposed a curfew. At least 21 people were injured.
The Cardinal of the Catholic Church in Sri Lanka released a statement calling for the resignation of the president.     (See full text at bottom)
AsiaNews reports that thousands of protesters in the capital Colombo broke through police barricades and stormed the president's official residence in one of the largest anti-government protests the country has experienced since the start of the economic crisis. According to defence sources, President Gotabaya Rajapaksa fled after protesters stormed the presidential residence.
At least 21 people, including two policemen, were injured in the clashes and taken to hospital. Yesterday the police, in anticipation of the weekend demonstrations, had imposed a curfew in the capital. For months, the population has been protesting against the high cost of living and the unsustainable economic situation. In April, the island had declared bankruptcy. Due to the shortage of foreign currency, Sri Lanka is unable to import fuel and basic necessities. Many blame President Rajapaksa for the country's decline.
Text Source: Asia News
STATEMENT : THE PRESS RELEASE OF HIS EMINENCE MALCOLM CARDINAL RANJITH, ARCHBISHOP OF COLOMBO ON THE PRESENT ECONOMIC CRISIS IN SRI LANKA
It is with sadness that we note that our beloved motherland has fallen into a state of total economic bankruptcy, which has never been experienced before. The resultant level of suffering heaped upon our people has become intolerable by the day and has pushed them into a dark abyss, which cannot be explained in human words. With the appointment of the new Prime Minister, hopes were somewhat rekindled of a recovery and so we preferred to remain silent in order not to be an obstacle to solutions being found for the current problems. We observed the developments patiently before making any definite comments. Yet, since the present plight the people are facing, has become even worse and unbearably painful, as a citizen of this country and as a spiritual leader, I have felt it my duty not to wait in silence any longer and to speak out on behalf of the people who are undergoing this suffering
It has to be stated very clearly that the present crisis and the despondent situation it has brought about has to be directly attributed to the President and the Government of Sri Lanka for the shortsighted and arbitrary decisions they have continued to make in the last two anda half years. From the very beginning we did not hesitate to condemn the stubborn and oppressive burdens that had been placed on the people, fleecing them and stealing their money and the assets of the country in a corrupt manner. Yet, up until now there has not been any investigation or bringing to book of those responsible for these corrupt and dishonest practices and decisions. Still we notice that no serious attempt is being made or any plans or vision prepared to solve the problems this country is facing in the matter of the ongoing severe economic crisis, the acute shortage of fucl, electricity supply, medicines, needs of the agro industry, education services or any other of the essential services. While that is so, people are spending days in queues going through untold hardships in order to obtain the essentials and the Government has no cohesive plan or project which could definitely free them from this situation.
The biggest obstacle to liberating this country from this sad situation is the fact that the Rajapaksa family continues to stay in power inspite of a majority of the people in this country not reposing any trust in them in anyway. This blatant neglect of duty on the part of the ruling party of the Rajapaksas to serve them, has made it very clear to the people that this family considers their political power as being more important than the wellbeing of the people, thus proving that everything done so far amounted to only political jugglery. Hence, their credibility before the people has fallen to such a level that all the attempts they made for financial, political or constitutional changes or amendments have been rejected outright by the public.
Hence, on behalf of the suffering people, what I am earnestly requesting from the President and the Government of Sri Lanka, Is to accept responsibility for this sad situation and step down from their positions, since they have no moral right to continue in office anymore tinder these circumstances and hand over the power back to the people without causing further suffering to them.
If that happens, the people will be enabled to establish a multiparty interim government in order to effect the desired total and structural system change in the manner that is credible and transparent to all. Such a short term government will thus be expected to solve the immediate problems facing the people with the guidance and instructions of a technical and professional team of experts, Once the situation of this country improves, it is necessary to conduct a general election as soon as possible in order to find the mind of the general public. I also request all the political leaders of the opposition to come forward in order to free the people and the nation from this situation and to work in unity and transparency renouncing their petty political and ideological limitations.
Archbishop's Howse, Boretla, Colombo 08, Sri Lanka Tel 694+ 22-269S4723 FaceD4-12+2692007 E math archbishop@sltnetlik / adsecretariate@gmailcom Qlateatm Gardinal Gtanjith
Source: https://archdioceseofcolombo.lk/news/The%20press%20release%20of%20His%20Eminence%20Malcolm%20Cardinal%20Ranjith,%20the%20Archbishop%20of%20Colombo%20on%20the%20present%20economic%20crisis%20in%20Sri%20Lanka.