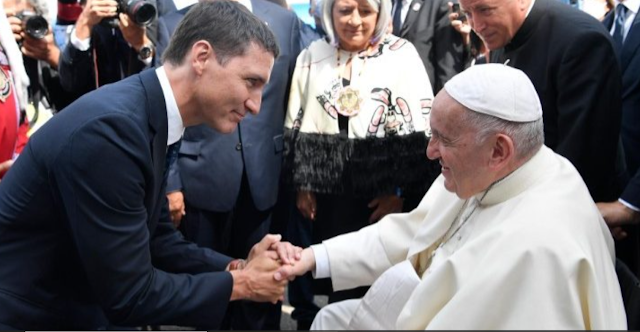 Apostolic Journey to Canada: Meeting with the Civil Authorities, with the representatives of the Indigenous Peoples and with the Diplomatic Corps at the "Citadelle de Québec" (Second Video below shows airplane arrival)

Her Excellency and the Prime Minister will welcome His Holiness Pope Francis upon his arrival at the Residence of the Governor General at the Citadelle of Québec.

Following the addresses to Canadians, the Holy Father departs the Citadelle of Québec, making his way via popemobile to the Plains of Abraham where he will make a Giro (tour) among the people gathered. Following the Giro, the Holy Father travels to the residence of the Archbishop of Québec, where he will reside during his stay in the province. The media has open access to the Plains of Abraham all the time - no overpass or secure bus transport required. Go at your leisure. There will be excellent content there.

On the Plains of Abraham on Wednesday, July 27 from 1:30 p.m. - 7:00 p.m., a special musical program will take place featuring Indigenous and Non-Indigenous artists building on the theme: “Walking Together: Hope for Reconciliation”. See the media release here for more information. On July 27, the public will also be able to view the arrival of Pope Francis in Quebec, speeches at the Citadelle of Québec and the Mass at Ste. Anne de-Beaupre (July 28) on large screens offered at the Plains.

Present at the Plains of Abraham will also be Puamun Meshkenu: The marchers are currently walking 275 km and will reach the Plains of Abraham at the Edwin-Bélanger Bandstand between 1 and 2 p.m. on July 27. They will then begin the final leg of their walk and will be welcomed into the heart of the program immediately after Pope Francis’ arrival at the Quebec City airport. A delegation will testify on the main stage about their experience and their common goal of healing and reconciliation.