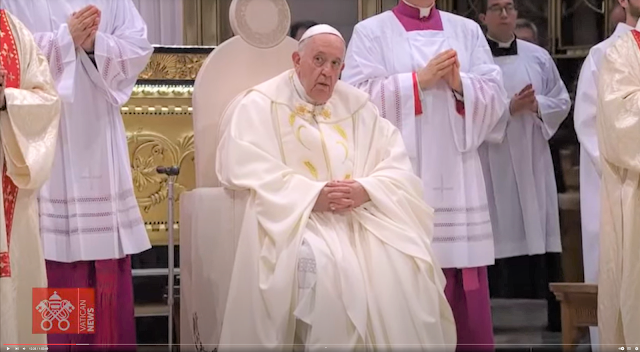 Press Play on the Video below :

A place of prayer and celebration for large and small groups, the cathedral also presents a number of concerts, recitals and exhibitions throughout the year. The cathedral contains the tomb of St. François de Laval, a holy door and a large reliquary of Canadian saints and blessed.

Commentary on vespers at Cathedral-Basilica of Notre-Dame de Québec:

As the final liturgical action to be celebrated by the Pontiff in his Apostolic Journey to Canada, there will be a gathering of all those serving the Church, drawing from those traveling to Quebec for the Papal Visit to Canada.

Most of the members of the Canadian Conference of Catholic Bishops, as well as their collaborators in their respective dioceses, will be gathered in this historic Cathedral Church for the celebration of Evening Prayer, also referred to as Vespers.

All consecrated persons and clergy are required by Canon Law, the law of the church, to pray several times throughout the day, from a compilation of the Psalms of the Old Testament.

The evening hour of prayer tends to be the most frequently done among religious communities. On this occasion, we will see the Holy Father gathering with the clergy and lay pastoral workers of Canada, taking the opportunity to pray.

Amongst Canadian clergy and workers serving the Church, we can anticipate that, in his homily, the Holy Father will address his observations, concerns, and expectations of what the Canadian Bishops and their collaborators must be attentive to in carrying out their ministry, challenges and opportunities, especially in light of this particular pilgrimage of healing, reconciliation and hope.

As the Holy Father enters through the back sacristy door of the cathedral into the sanctuary, he will be greeted by the majestic music of the St. Michael's Choir School of Toronto. A boys' choir has been especially assembled for this celebration. Together they will sing a traditional antiphon in honor of the Pope, Tu es Petrus ‘You are Peter’, in remembrance of the words of Christ in the Gospel of Matthew when he declares Peter as his successor and Prince of the Apostles.

Pope Francis is the 266th successor of St. Peter. Upon his entry, the assembly will stand to greet the Holy Father with respect. After he takes his place at his seat in front of the altar, the assembly will be seated and Pope Francis will be greeted with words of welcome from the current President of the Canadian Conference of Catholic Bishops, His Excellency Bishop Raymond Poisson, of the Diocese of Saint-Jerome-Mont-Laurier as well as the Cardinal Archbishop of Québec, Gerald Cyprien Lacroix. After the words of welcome, the Pope will then begin the ritual of Vespers.

The St. Michael's Choir School will assist the gathered congregation in singing the chant of these songs. It is customary that, when gathered for this prayer, the group divides into two parts and alternates back and forth between stanzas of the text as they chant.

It is expected that the Holy Father will be assisted by a deacon who is in his 90’s and was one of the very first permanent deacons ordained after the reinstitution of the diaconal order following the Second Vatican Council. He has served for over 50 years in the Archdiocese of Québec. The same deacon will offer a brief scripture reading. The Holy Father will then address his homily to the congregation.

After the various other components of this prayer have concluded, the Holy Father will offer his final blessing.

Once the choir again sings in a jubilant manner in recognition of the dignity of the Holy Father, the Vicar of Christ and the successor of St. Peter, he will be escorted by His Eminence Cardinal Lacroix, down the center aisle to venerate the remains of the first Bishop of Canada, through whose intercession and in whose honor the evening's prayer will be offered.

St. François de Laval was canonized by Pope Francis in 2016 on the 350th anniversary of the establishment of the Diocese of Quebec, which was at one time comprised nearly all of what is now modern North America. St. François was a missionary Bishop from France. He was renowned for his harmonious and peaceful relations with the Indigenous Peoples of this land.

Positioned next to the tomb of St. François are the relics of 18 additional Saints who have their origins in Canada and have been canonized.

The Holy Father will then be led to the sacristy where he will make his exit from the cathedral, entering his motorcade and returning to his residence.
Source: PapalVisit.ca - Media release