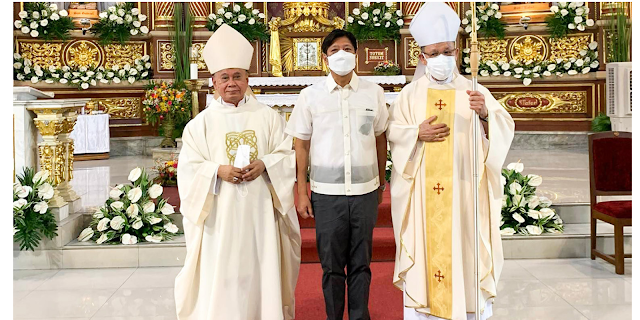 CBCP Release: Manila archbishop to Marcos: Pursue the path of justice, peace President Ferdinand Marcos Jr. (center) poses for a photograph with Cardinal Jose Advincula of Manila (right) and Cardinal Orlando Quevedo, archbishop emeritus of Cotabato, after a Thanksgiving Mass at the San Miguel Parish Church in Manila on July 1, 2022.
RCAM AOC
By CBCP News -  Manila, Philippines
A top church official in Manila called on President Ferdinand Marcos Jr to serve the common good and lead the country towards the path of justice and peace.
Marcos on Friday attended a Thanksgiving Mass presided over by the cardinal at the San Miguel Parish Church which is close to the Malacañang compound. In his homily, the Manila archbishop asked Marcos “to seek the good not only of some individuals or particular groups but of the Philippine society as a whole”. Among those who concelebrated the Mass were Cardinal Orlando Quevedo, archbishop emeritus of Cotabato, and some priests of the Manila archdiocese. Also in attendance were Vice President Sara Duterte and other members of the Marcos Cabinet. Addressing the officials, Advincula urged them to “be leaders who give life to our people, especially the needy and disadvantaged”. “As we meet in our offices and conference halls asking questions in our heads, may we be mindful of our people who ask questions in their empty stomachs,” he said. “Guided by truth, urged by charity, and passionate for justice and peace, may you spend yourselves in the service of the common good,” Advincula added. The cardinal then asked the public to pray for the country’s leaders “and patronize their good intentions and initiatives”. “They need our prayers and cooperation so that their efforts for the good of all will bear fruits,” he also said. Marcos formally assumed the presidency on June 30 after winning the country’s presidential elections in a landslide victory last May.
Source: Catholic Bishops Conference of the Philippines CBCP