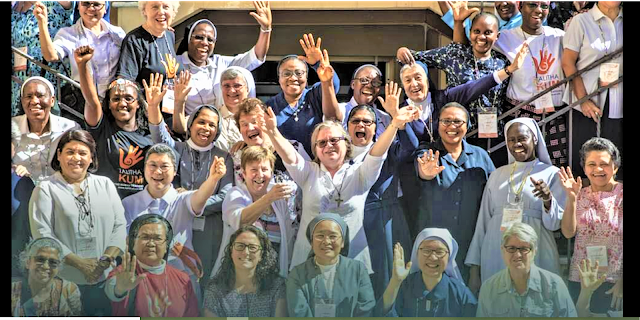 In one year the network of Catholic nuns saved 26 thousand women from human trafficking in Asia
Friday, 15 July 2022
Agenzia Fides reports that as many as 26,065 women from Asia were prevented and rescued from human trafficking in 2021 by "Talitha Kum", a Federation of Catholic nuns that is committed to combating and eradicating human trafficking.
"Prevention was the Asian networks' priority. It was fostered through training and awareness-raising campaigns in schools, parishes, and local communities, targeting especially women, youth, religious, tribal communities, and migrant workers", said Sr. Abby Avelino, director of Talitha Kum Asia. According to her, the issue of human trafficking in Asia has been exacerbated by the current socio-economic situation. Many countries in Asia face severe economic crises due to the impact of the Covid-19 pandemic and political conflicts such as Myanmar, Sri Lanka, and Pakistan.
"Crisis like these increase the number of people who become vulnerable to trafficking, particularly women, girls, young people, migrants, and refugees. The predominant forms of domestic and international human trafficking are forced labor, forced marriage and sexual exploitation", the nun says in a report of Talitha Kum sent to Fides. "As the economic problems become increasingly complicated, more vulnerable people get trapped in exploitation in order to survive. One area of entrapment is cyber-based trafficking and Online Sexual Exploitation of Children (OSEC), " says Sr Avelino, a member of Maryknoll congregation.
Talitha Kum Asia continued its prevention campaigns that have been moved online since the beginning of the Covid-19 pandemic to ensure continued information sharing on anti-trafficking. Talitha Kum networks in Asia hosted monthly webinars on human trafficking to strengthen prevention, protection, capacity building, and networking, as well as collaboration, and advocacy. The impact of this program has given greater visibility to Talitha Kum networks. Talitha Kum Bangladesh and Talitha Kum Vietnam were established in 2021 as an outcome of the growing visibility of their work. "We have organized activities using the Sufficiency Economy Program, helping women and young people in villages and mountainous areas to manage natural food resources, such as herbs and vegetables that can be found in the local forests. This program has had a satisfying impact on the local community in supporting and promoting capacity building," Sr Avelino notes.
"We launched the Talitha Kum Anti-Trafficking Youth Ambassadors program in 2021 to engage more young people with the vision and mission of Talitha Kum. Young women and men, representing ten countries in Asia, were trained to be anti-trafficking youth ambassadors among their peers at the grassroots level," she remarks. These trained youth leaders developed their skills in promoting Talitha Kum’s work at the grassroots in creative and innovative ways with the coordination of Sisters in the networks. As a result of this program, many young people’s awareness of the issues of trafficking grew as they participated in various levels of Talitha Kum’s anti-human trafficking campaigns. Talitha Kum is a Rome-based international network of religious sisters dedicated to combatting and eradicating human trafficking. It was founded by the International Union of Superiors General (UISG). Talitha Kum Asia partners with 65 Catholic organizations, 56 NGOs, 18 national organizations and 42 international government agencies. In the Asian region, Talitha Kum has 3521 members from 205 women religious congregations in 20 countries. In 2021, Talitha Kum Asia provided care and support to 3972 victims of human trafficking. It organized 3909 trainings and workshops. (SD) (Source: Agenzia Fides, 15/7/2022) Image: https://www.facebook.com/talithakum.uisg