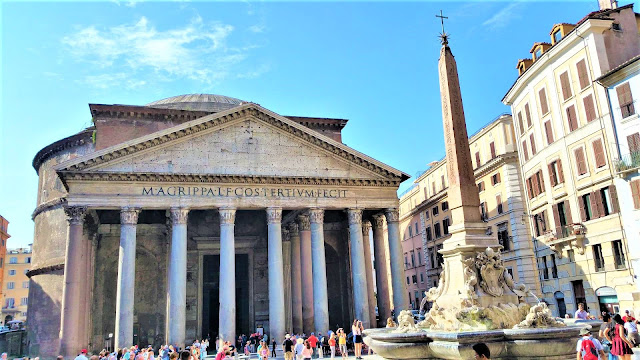 The exterior facade of the Church of Saint Mary and the Martyrs was sprayed with the words   "Aliens exist." Unknown vandals sprayed the outer facade of the approximately 1,900-year-old Pantheon, which is now a church. "Corriere della Sera" reported that the graffiti in blue was discovered a few days ago (July 16), and there is no trace of the perpetrators. Experts are busy analyzing the color properties in order to properly remove the graffiti.
The outside of the Pantheon is not fully under video surveillance, the newspaper explained quoting the director of the Pantheon, Gabriella Musto. An increasing number of homeless people sleep at the Pantheon and illegal tours around the building are also a growing problem.
The Pantheon, one of the best-preserved buildings from Roman antiquity, is located in the center of Rome, not far from Piazza Navona. It was completed under Emperor Hadrian between 125 and 128 AD. For around 1,700 years, it had the largest dome in the world in terms of internal diameter. In the 6th century it was reconsecrated as a church. As a Roman Catholic Church, the official Italian name today is Santa Maria ad Martyres. Many famous people, including the painter Raffael (1483-1520), are buried in the Pantheon.