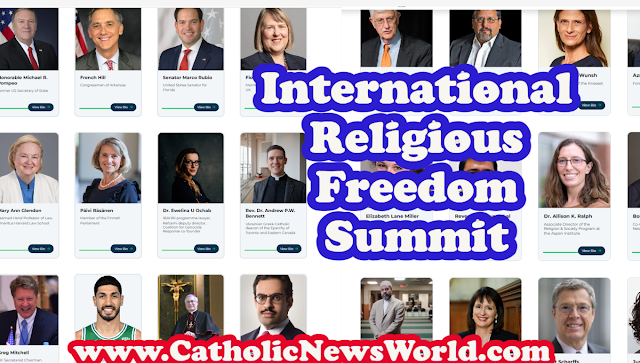 The International Religious Freedom (IRF) Summit 2022
was the second annual gathering of international freedom advocates and activists from around the world. It highlighted increasing threats to freedom of religion, conscience and belief, and once again offered the IRF community a chance to come together to advance shared goals for extending these fundamental freedoms to people and faith communities across the globe. The following short videos provide key highlights and insights from the Summit:
They also convened a Civil Society Congress to innovate and develop solutions for religious freedom.
WASHINGTON — In recent years levels of persecution and restriction based on faith or belief have increased around the world. This is despite a growing movement of people who are committed to protecting this fundamental human right. It is time to think big for religious freedom.
(IRF) Summit 2022 convened a Civil Society Congress that developed ideas to promote religious freedom and innovate solutions for threats faith communities face around the world.
The congress—which took place on June 28 from 2-6 p.m. at Renaissance Washington’s Potomac Ballroom— provided organizations and religious communities the opportunity to send a delegation to present their proposal in front of their fellow advocates, as well as a listening panel of government representatives.
All proposals will be collected and published in a report.
The Summit was convened by Samuel Brownback and Dr. Katina Lantos Swett, president of the Lantos Foundation for Human Rights and Justice. It is supported by more than 40 diverse partners, including the IRF Secretariat, Religious Freedom Institute, Uyghur Human Rights Project, American Hindu Foundation, Open Doors, United States Conference of Catholic Bishops and Alliance Defending Freedom, among others, and aims to bring greater attention to religious freedom violations and to create a powerful coalition of groups to advance the cause of religious freedom around the world.
It took place on Tuesday, June 28 through Thursday, June 30 in Washington, D.C.
More information on the International Religious Freedom Summit 2022 is available here.
International Religious Freedom Summit 2022 was a powerful, broad coalition of religious, human rights and civil society groups that advocate for religious freedom for all people, everywhere at all times.
Samuel Brownback served as Ambassador-at-Large for International Religious Freedom (2018-21) and is co-chair of IRF Summit 2022.
Dr. Katrina Lantos Swett is president of the Lantos Foundation for Human Rights and Justice, former Chair of the United States Commission on International Religious Freedom (USCIRF) and is co-chair of IRF Summit 2022.
Source: https://thekcompany.co/press-release/irf-summit-2022-convenes-civil-society-congress-to-innovate-and-develop-solutions-for-religious-freedom/client/1022/