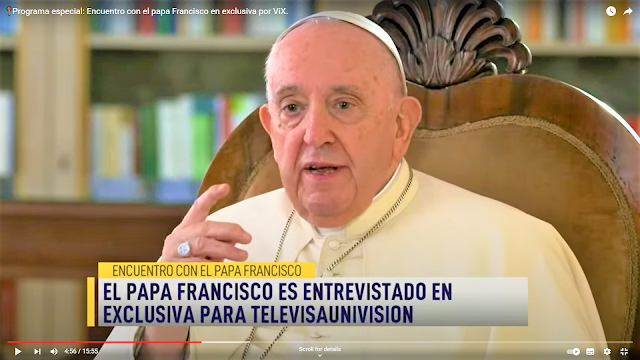 Pope Francis in an interview with Televisa Univision’s streaming service ViX, Pope Francis discusses his health and the possibility of resigning, as well as the pandemic, the war in Ukraine, and the fight against abuse of minors.
Vatican News released excerpts from the video which can be seen below:
"I have no intention of resigning, not for the moment."
Pope Francis gave that assurance in a wide-ranging interview granted to Mexican journalists Maria Antonieta Collins and Valentina Alazraki with Televisa Univision's ViX streaming service.
In an excerpt of the interview posted on Univision Noticias' YouTube channel, the Pope talks about his health and rumors circulating in recent weeks that he would renounce the Petrine ministry.

"At the moment, I don't feel that the Lord is asking me," said Pope Francis. “If I felt He was asking me, then yes.”
He then called it a "coincidence" that he will go to the Italian city of L'Aquila, where Pope Celestine V is buried, during the next Consistory of Cardinals in late August.
Pope Francis' Personal Health situation
Regarding the condition of his knee, the Pope stressed that, although he feels "limited", he also thinks it “is improving."
However, he added, the trip to the Democratic Republic of Congo "certainly" could not have been made.
"I did not have the strength," he explained. "Now, 20 days later, progress has been made.”
He then reiterated the "great example given by Benedict XVI" which he said will help him "make a decision" should it be necessary to resign.
Pope Francis also spoke of his "great appreciation" for the Pope Emeritus, saying he is "a man who is sustaining the Church with his goodness and his retreat" of prayer. And he shared that he feels joy every time he visits the Pope Emeritus at the Mater Ecclesiae Monastery.
Possibility of a Resignation
Responding to a question about the possibility of setting out rules regarding the figure of a Pope Emeritus, Pope Francis noted that "history itself will help to regulate better."
"The first experience went very well," he said, because Benedict XVI "is a holy and discreet man."
For the future, however, he added, "it would be better to define things or explain them better."
Talking about his own possible resignation, Pope Francis replied that he would not return to Argentina.
"I am the Bishop of Rome. In that case I would be the bishop emeritus of Rome," he said, adding that he could stay at St. John Lateran.
The Pope recalled that, ahead of the Conclave, he had already prepared his retirement as Archbishop Emeritus of Buenos Aires. He said it would have been important for him to “hear confessions and visit the sick."
This would have been his "apostolate", his "work," he said.
"To be at the service of the people where you can," he said, "this is what I was thinking about in Buenos Aires.” He added that he would enjoy doing the same now if he were to ever resign the papacy.
Third World War fought in parts
In the interview, broadcast in its entirety by Televisa Univision, the Pope also addressed several other current issues.
He recalled the ongoing pandemic and the poignant moment of the Statio Orbis on 27 March 2020. Pope Francis then offered his thoughts on the war in Ukraine, stressing that he believes it is crucial to speak of "the country that is being attacked rather than the aggressors."
He confirmed his intention to meet with Russian Orthdox Patriarch Kirill in September at the interfaith event to be held in Kazakhstan.
Citing the drama of countries wracked by violence—such as Yemen and Syria—he reiterated that the world is living through a "Third World War fought piecemeal", saying that nuclear weapons "are immoral", including their possession and not just their use.
Pro-Life and Politicians
Pope Francis reaffirmed his condemnation of abortion, saying it is completely unjust to eliminate a human life.
He said his stance can be affirmed "on the basis of scientific data" which are non-negotiable.
Regarding the issue in the United States, after the Supreme Court's decision to overturn the ruling in Roe v. Wade on the so-called ‘right’ to abortion, the Pope noted the polarization present in the country, reiterating that pastors must always take care of the pastoral dimension and avoid creating political problems.
The interviewer asked the Pope how a priest should act in the case of a Catholic politician who supports abortion.
"I leave it to his conscience," said Pope Francis. "He should speak with his bishop, with his pastor about this inconsistency.”
Cuba
The Pope then turned to Cuba, expressing his love for the Cuban people and the country's bishops.
He confided that he had a friendly relationship with former President Raúl Castro, expressing satisfaction with the re-establishment of diplomatic relations between Cuba and the United States at the time of the Obama presidency.
Thoughts on Overcoming Abuse Crisis
Pope Francis also spoke about his expectations for the upcoming Apostolic Journey to Canada under the banner of forgiveness for past evils.
He dwelt on the crimes of femicide, new forms of slavery, and in particular the scourge of pedophilia in the Church.
The Pope recalled the impact the scandals have had in the United States, citing in particular the Pennsylvania Report.
"The lid has come off the pot," he acknowledged. "Today, the Church has become increasingly aware" about sexual abuse, calling it a monstrous crime.
The Church, he strongly reiterated, greatly desires “to move forward" and to no longer be "complicit" in these crimes.
Source: Edited from Vatican News