Pope Francis' Letter to Bishops of Ukraine "I associate myself spiritually with your suffering, assuring you of my prayers and commitment..." FULL TEXT 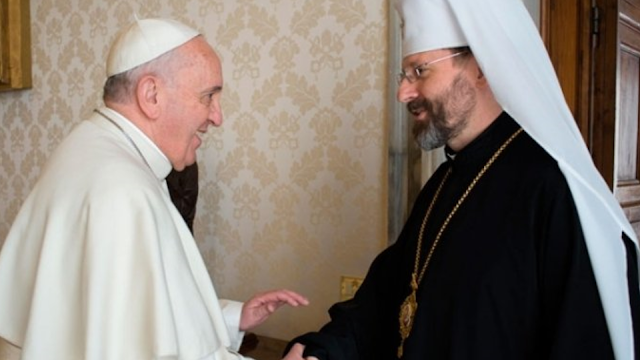 The Letter that the Holy Father Francis sent to the Bishops of the Synod of the Ukrainian Greek-Catholic Church, gathered in Przemysl (Poland) from 7 to 15 July 2022:
To the Venerable Brother
His Holiness
The Major Archbishop of Kiev-Halych
Sviatoslav Shevchuk
Praised be Jesus Christ!
Your Holiness,
Venerable Brother Bishops of the Ukrainian Greek Catholic Church,
I cordially greet all of you gathered at the Synod in Przemyśl on July 7-15 this year. The current Synod, as previously planned, was to be held in Kiev, but the dramatic situation of the war, which is already taking place in the fifth month, did not allow it.
Recently, on June 27, the Ukrainian Greek Catholic Church celebrated the liturgical commemoration of the Blessed Martyrs, beatified by Saint John Paul II in Lviv, during his 2001 pilgrimage to Ukraine. But it is at this point that we understand better the circumstances in which those Martyrs lived and died, including bishops, priests, religious, religious and lay people who fell victim to the Soviet communist regime. Today, they defend their Nation which is suffering from heaven. I entrust to their protection all Members of the Synod.
Dear Brother Bishops, I associate myself spiritually with your suffering, assuring you of my prayers and commitment, which sometimes, due to the delicate situation, do not appear in the media. The Synod of Bishops, whose theme is "Synodality and Catholicism: the experience of the UKGK", must be for the good of the Church and of the individual faithful. It must also be a place of meeting and mutual help on a common path of life, in search of new ways to accompany the faithful. I would also like to recall once again the words that I addressed to the Major Archbishop and the Metropolitans at our meeting in Rome in July 2019:
“The closeness of the Shepherds to the faithful is a channel that is built up day after day and which brings the living water of hope. This is how it is built up, meeting after meeting, with priests who know and take to heart the cares of the people, and with the faithful who, through the protection they receive, assimilate to the proclamation of the Gospel that they transmit to the Pastors. They do not understand it if the Shepherds are focused only on talking about God; they understand if they do everything in their power to give them God: by giving themselves, being close, as witnesses of the God of hope made flesh to walk in the ways of man. May the Church be a place of hope, always open doors, comfort and encouragement ”(cf. AAS 7/2019 /, 1126-1127).
May this meeting inspire you to creatively continue the extraordinary tradition of the Fathers' faith, rooted and sustained for generations in the People of God of your Nation. I pray that your Church and your Nation, animated by the power of the sacraments, gazing at the Immaculate Heart of Mary, will not lose their Christian hope for a better tomorrow.
To all members of the Synod I impart my Blessing.
Rome, at St. John in Lateran, June 30, 2022
Source: https://press.vatican.va/content/salastampa/it/bollettino/pubblico/2022/07/11/0529/01070.html