Pope Francis on Flight to Canada Prays Angelus with Journalists and says “Today we need to go back to grandparents, I would say so as a leitmotif in the sense that young people must..." 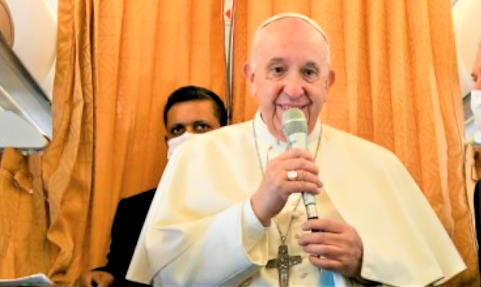 Pope Francis on his Papal Flight for 'Penitential Pilgrimage' to Canada, Pope Francis prayed the Angelus with journalists on the plane and remembered the World Day for Grandparents and Elderly celebrated by the Church on Sunday, July 24th. The trip, which departed from Rome at 9am, is over 10 hours and the Pope will arrive around 11:20am mountain time.
Pope Francis said:
“Today we need to go back to grandparents, I would say so as a leitmotif in the sense that young people must have contact with their grandparents, go back to them, go back to their roots, not to stay there no, but to take them forward like the tree: which takes strength from the roots and carries it forward in the flowers in the fruit.”

"I would also like to remember as a religious, the old men and women religious, the 'grandparents' of consecrated life: please do not hide them, they are the wisdom of a religious family and that the new men and women religious, the novices, the novices we have contact with them, they will give us all the experience of life that will help us so much, so much to go forward..."
"Let us remember them today in a special way, from them we have received so many things: first of all history. Thank you."
The Holy Father is on his way to Canada for his 37th Apostolic Journey, marking his 56th country visited.
This penitential pilgrimage to the nation is aimed at reconciliation and healing with the country's indigenous peoples.
This trip the Holy Father was accompanied by about 80 journalists from more than 10 countries.
The Pope wished everyone a good Sunday, the Pope thanked them for their "service" and "company."
The Pope invited those gathered to join him in praying the Sunday Angelus prayer.
Source: Vatican News
Papal Visit Media Summary: