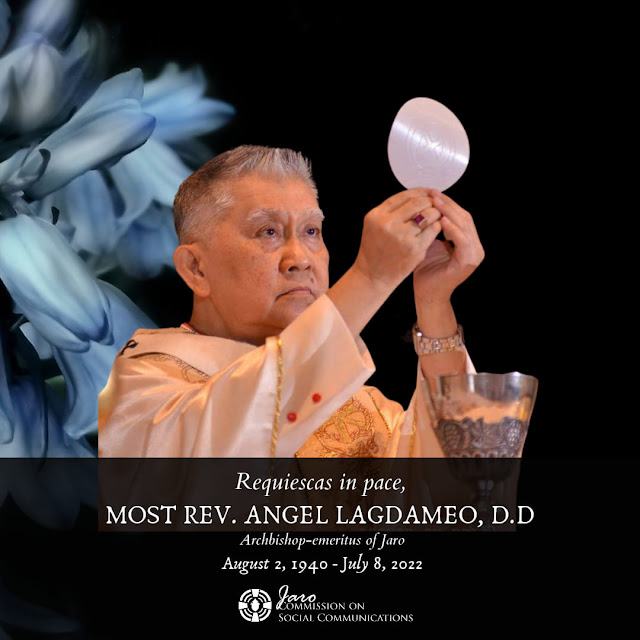 CBCP : Archbishop emeritus Angel Lagdameo of Jaro, former President of the Catholic Bishops’ Conference of the Philippines.  News July 8, 2022 Manila, Philippines Retired Archbishop Angel Lagdameo, former president of the Catholic Bishops’ Conference of the Philippines, died on Friday. He was 81. The former Jaro archbishop passed away at 8:30 a.m. in Iloilo City, according to the archdiocese. “Let us include him in our prayers and masses,” it said. The archbishop served as CBCP President from December 2005 to December 2009. Prior to his election, he was CBCP vice president for also two terms of four years. Archbishop Lagdameo was ordained priest for the Diocese of Lucena on Dec. 19, 1964. He was appointed auxiliary bishop of Cebu in June 1980. In January 1986, he was designated as co-adjutor bishop of Dumaguete and then he became bishop of the diocese in May 1989. He was named archbishop of Jaro on March 11, 2000. Pope Francis accepted Lagdameo’s resignation at the age of 77 in 2018.
Source: CBCP Release
Image Archdiocese of Jaro Facebook Page