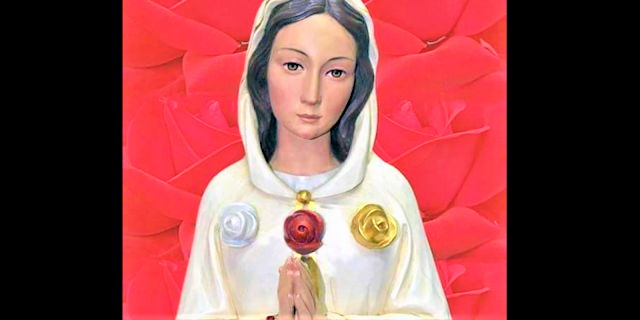 In antiquity the rose was considered a symbol of mystery. The sprout (virga, bush) is Mary and Christ is its flower (rose). The explicitly Marian interpretation of this symbol dates to the fifth century. Sedulius Caelius is the first known to call Mary a "rose among thorns" (Carmen paschale II, 28-31). Theophanes Graptos (Monk and metropolite of Nikaia, +845) uses the same symbolism to express Mary's purity and the fragrance of her grace (Oktoechos, Friday of the sixth week).

Marian references were made to rose and rosebush inspired by Isaiah 11:1 ("...a shoot shall sprout from the stump of Jesse and from his roots a bud shall blossom.") and Sirach 24, 14 ("like a rosebush in Jericho"). Both passages refer to God-graced fertility and growth, which Christians apply to the mysterious generation of Christ from the womb of Mary.

The Litany of the Blessed Virgin Mary [The Litany of Loreto] has an invocation to the Virgin under the title,  "Rosa Mystica".

A miraculous devotional image enshrined at the Maria Rosenberg Church in Waldfischbach-Burgalben, Germany, contains an 1138 painting of Mary, featuring roses.

Mary Appears as the "Rosa Mystica" In Montichiari

Montichiali with its suburb Fontanelle is a small town in Northern Italy, twenty kilometers from Brescia, the bishop's town. It is situated in front of the Italian Alps in the fertile plain of the river Po. The name means in English, "Bright Mountains." On a hill lies the old castle of St. Mary and the venerable Church of San Pancrazio.

Pierina Gilli was born on August 3, 1911, at Montichiari and worked as a nurse in the hospital there. The first time, the dear Mother of Christ appeared to her in a room of the hospital, in the spring of 1947. Our Lady, a beautiful woman, wore a violet dress and a white veil around her head. She was very sad, her eyes were filled with tears which fell to the floor. Her breast was pierced by three big swords. Our Lady said, "Prayer-Penitence-Expiation" and was silent. The Marian apparitions continued between 1947 and 1966 to Pierina Gilli.

PRAYER TO THE IMMACULATE VIRGIN, ROSA MYSTICA TO REQUIRE HER INTERCESSION (Can be said as a Novena for 9 days)

Immaculate Virgin, Mother of Grace, Rosa Mystica, in honor of thy Divine Son, we prostrate ourselves at your feetto implore God’s mercy.We beg for help and grace, not relying on any merit of ours,but on the kindness of your motherly heart,and confident that you will grant our urgent requests.Hail Mary…

Rosa Mystica, Mother of Jesus,Queen of the Holy Rosary and Mother of the Church,Mystical Body of Christ, we implore the gifts of unity and peace for the world parched by discord,and the graces to convert the souls of all your erring children. Hail Mary… Amen.

Rosa Mystica, Queen of the Apostles,let flourish around the Eucharistic Altarsmany religious and priestly vocations which,with the holiness of lives and their burning zealfor the salvation of the souls,will spread throughout the world the Kingdom of your Jesus!Fill us with your heavenly graces!

Hail Holy Queen… Rosa Mystica, Mother of the Church, pray for us.