Saint July 15 : St. Vladimir the Great of Kyiv a Prince and Layman who Brought Christianity to Russia and Ukraine 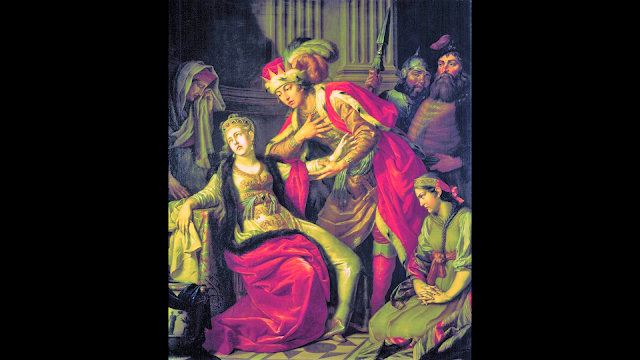 Grand Duke of Kyiv and All Rus', grandson of St. Olga, and the first Kyivan Rus' ruler to embrace Christianity, born in 956; died at Berestova, 15 July, 1015. St. Olga could not convert her son and successor, Sviatoslav, for he lived and died a pagan and brought up his son Vladimir as a pagan chieftain. Sviatoslav had two legitimate sons, Yaropolk and Oleg, and a third son, Vladimir, borne him by his court favourite Olga Malusha. Shortly before his death (972) he bestowed the Grand Duchy of Kyiv on Yaropolk and gave the land of the Drevlani (now Galicia) to Oleg. The ancient Russian capital of Novgorod threatened rebellion and, as both the princes refused to go thither, Sviatoslav bestowed its sovereignty upon the young Vladimir. Meanwhile war broke out between Yaropolk and Oleg, and the former conquered the Drevlanian territory and dethroned Oleg. When this news reached Vladimir he feared a like fate and fled to the Varangians (Variags) of Scandinavia for help, while Yaropolk conquered Novgorod and united all Russia under his sceptre. A few years later Vladimir returned with a large force and retook Novgorod. Becoming bolder he waged war against his brother towards the south, took the city of Polotzk, slew its prince, Ragvald, and married his daughter Ragnilda, the affianced bride of Yaropolk. Then he pressed on and besieged Kyiv. Yaropolk fled to Rodno, but could not hold out there, and was finally slain upon his surrender to the victorious Vladimir; the latter thereupon made himself ruler of Kyiv and all Rus' in 980. As a heathen prince Vladimir had four wives besides Ragnilda, and by them had ten sons and two daughters. Since the days of St. Olga, Christianity, which was originally established among the eastern Slavs by Sts. Cyril and Methodius, had been making secret progress throughout the land of Rus' and had begun to considerably alter the heathen ideas. It was a period similar to the era of the conversion of Constantine.

Notwithstanding this undercurrent of Christian ideas, Vladimir erected in Kyiv many statues and shrines (trebishcha) to the Slavic heathen gods, Perun, Dazhdbog, Simorgl, Mokosh, Stribog, and others. In 981 he subdued the Chervensk cities (now Galicia), in 983 he overcame the wild Yatviags on the shores of the Baltic Sea, in 985 he fought with the Bulgarians on the lower Volga, and in 987 he planned a campaign against the Greco-Roman Empire, in the course of which he became interested in Christianity. The Chronicle of Nestor relates that he sent envoys to the neighbouring countries for information concerning their religions. The envoys reported adversely regarding the Bulgarians who followed (Mohammedan), the Jews of Khazar, and the Germans with their plain missionary Latin churches, but they were delighted with the solemn Greek ritual of the Great Church (St. Sophia) of Constantinople, and reminded Vladimir that his grandmother Olga had embraced that Faith. The next year (988) he besieged Kherson in the Crimea, a city within the borders of the eastern Roman Empire, and finally took it by cutting off its water supply. He then sent envoys to Emperor Basil II at Constantinople to ask for his sister Anna in marriage, adding a threat to march on Constantinople in case of refusal. The emperor replied that a Christian might not marry a heathen, but if Vladimir were a Christian prince he would sanction the alliance. To this Vladimir replied that he had already examined the doctrines of the Christians, was inclined towards them, and was ready to be baptized. Basil II sent this sister with a retinue of officials and clergy to Kherson, and there Vladimir was baptized, in the same year, by the Metropolitan Michael and took also the baptismal name of Basil. A current legend relates that Vladimir had been stricken with blindness before the arrival of Anna and her retinue and had recovered his sight upon being baptized. He then married Princess Anna, and thereafter put away his pagan wives. He surrendered the city of Kherson to the Greeks and returned to Kyiv in state with his bride. The Russian historian Karamsin (Vol. I, p. 215) suggests that Vladimir could have been baptized long before at Kyiv, since Christians and their priests were already there; but such an act would have humbled the proud chieftain in the eyes of his people, for he would have accepted in a lowly manner an inconspicuous rite at the hands of a secret and despised sect. Hence he preferred to have it come from the envoys of the Roman Emperor of Constantinople, as a means of impressing his people.

When Vladimir returned to Kyiv he took upon himself the conversion of his subjects. He ordered the statues of the gods to be thrown down, chopped to pieces, and some of them burned; the chief god, Perun, was dragged through the mud and thrown into the River Dnieper. These acts impressed the people with the helplessness of their gods, and when they were told that they should follow Vladimir's example and become Christians they were willingly baptized, even wading into the river that they might the sooner be reached by the priest for baptism. Zubrycki thinks this readiness shows that the doctrines of Christianity had already been secretly spread in Kyiv and that the people only waited for an opportunity to publicly acknowledge them. Vladimir urged all his subjects to become Christians, established churches and monasteries not only at Kyiv, but at Pereyaslav, Chernigoff, Bielegorod, Vladimir in Volhynia, and many other cities. In 989 he erected the large Church of St. Mary ever Virgin (usually called Desiatinny Sobor, the Cathedral of the Tithes), and in 996 the Church of the Transfiguration, both in the city of Kyiv. He gave up his warlike career and devoted himself principally to the government of his people; he established schools, introduced ecclesiastical courts, and became known for his mildness and for his zeal in spreading the Christian faith. His wife died in 1011, having borne him two sons, Boris and Glib (also known as Sts. Roman and David, from their baptismal names). After this his life became troubled by the conduct of his elder children. Following the custom of his ancestors, he had parcelled out his kingdom amongst his children, giving the city of Novgorod in fief to his eldest son Yaroslav; the latter rebelled against him and refused to render either service or tribute. In 1014 Vladimir prepared to march north to Novgorod and take it away from his disobedient son, while Yaroslav invoked the help of the Varangians against his father. Vladimir fell ill and died on the way. His feast in celebrated on 15 July in the Russian Orthodox and Ruthenian Greek Catholic calendars, and he has received the name of Ravnoapostol (equal to the Apostles) in the title of the feast and the troparion of the liturgy. The Russians have added in their service books words referring his conversion and intercession to the present Russian Empire (rossiiskaya zemlya), but the Ruthenians have never permitted these interpolations.