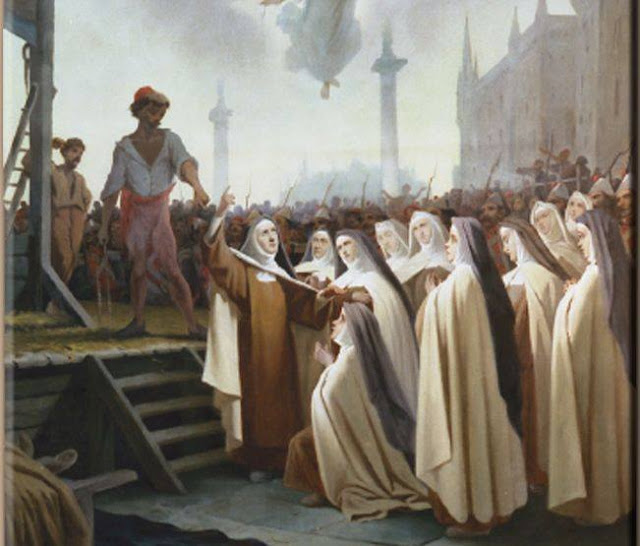 Guillotined at the Place du Trône Renversé (now called Place de la Nation), Paris, 17 July, 1794. They are the first sufferers under the French Revolution on whom the Holy See has passed judgment, and were solemnly beatified 27 May, 1906. Before their execution they knelt and chanted the "Veni Creator", as at a profession, after which they all renewed aloud their baptismal and religious vows. The novice was executed first and the prioress last. Absolute silence prevailed the whole time that the executions were proceeding. The heads and bodies of the martyrs were interred in a deep sand-pit about thirty feet square in a cemetery at Picpus. As this sand-pit was the receptacle of the bodies of 1298 victims of the Revolution, there seems to be no hope of their relics being recovered. Their names are as follows:
Madeleine-Claudine Ledoine (Mother Teresa of St. Augustine), prioress, b. in Paris, 22 Sept., 1752, professed 16 or 17 May, 1775;
Marie-Anne (or Antoinette) Brideau (Mother St. Louis), sub-prioress, b. at Belfort, 7 Dec., 1752, professed 3 Sept, 1771;
Marie-Anne Piedcourt (Sister of Jesus Crucified), choir-nun, b. 1715, professed 1737; on mounting the scaffold she said "I forgive you as heartily as I wish God to forgive me";
Anne-Marie-Madeleine Thouret (Sister Charlotte of the Resurrection), sacristan, b. at Mouy, 16 Sept., 1715, professed 19 Aug., 1740, twice sub-prioress in 1764 and 1778. Her portrait is reproduced opposite p. 2 of Miss Willson's work cited below;
Marie-Antoniette or Anne Hanisset (Sister Teresa of the Holy Heart of Mary), b. at Rheims in 1740 or 1742, professed in 1764; Marie-Françoise Gabrielle de Croissy (Mother Henriette of Jesus), b. in Paris, 18 June, 1745, professed 22 Feb., 1764, prioress from 1779 to 1785;
Marie-Gabrielle Trézel (Sister Teresa of St. Ignatius), choir-nun, b. at Compiègne, 4 April, 1743, professed 12 Dec., 1771;
Rose-Chrétien de la Neuville, widow, choir-nun (Sister Julia Louisa of Jesus), b. at Loreau (or Evreux), in 1741, professed probably in 1777; Anne Petras (Sister Mary Henrietta of Providence), choir-nun, b. at Cajarc (Lot), 17 June, 1760, professed 22 Oct., 1786.
Concerning Sister Euphrasia of the Immaculate Conception accounts vary. Miss Willson says that her name was Marie Claude Cyprienne Brard, and that she was born 12 May, 1736; Pierre, that her name was Catherine Charlotte Brard, and that she was born 7 Sept., 1736. She was born at Bourth, and professed in 1757; Marie-Geneviève Meunier (Sister Constance), novice, b. 28 May, 1765, or 1766, at St. Denis, received the habit 16 Dec., 1788. She mounted the scaffold singing "Laudate Dominum". In addition to the above, three lay sisters suffered and two tourières. The lay sisters are:
Angélique Roussel (Sister Mary of the Holy Ghost), lay sister, b. at Fresnes, 4 August, 1742, professed 14 May, 1769;
Marie Dufour (Sister St. Martha), lay sister, b. at Beaune, 1 or 2 Oct., 1742, entered the community in 1772;
Julie or Juliette Vérolot (Sister St. Francis Xavier), lay sister, b. at Laignes or Lignières, 11 Jan., 1764, professed 12 Jan., 1789.
The two tourières, who were not Carmelites at all, but merely servants of the nunnery were: Catherine and Teresa Soiron, b. respectively on 2 Feb., 1742 and 23 Jan., 1748 at Compiègne, both of whom had been in the service of the community since 1772.
The miracles proved during the process of beatification were:
The cure of Sister Clare of St. Joseph, a Carmelite lay sister of New Orleans, when on the point of death from cancer, in June, 1897;
The cure of the Abbé Roussarie, of the seminary at Brive, when at the point of death, 7 March, 1897;
The cure of Sister St. Martha of St. Joseph, a Carmelite lay Sister of Vans, of tuberculosis and an abcess in the right leg, 1 Dec., 1897;
The cure of Sister St. Michael, a Franciscan of Montmorillon, 9 April, 1898.
Five secondary relics are in the possession of the Benedictines of Stanbrook, Worcestershire.
Text from the Catholic Encyclopedia