Saint July 24 : St. Christina the Astonishing who Died and then Levitated During her Funeral and Lived a Penitential Life 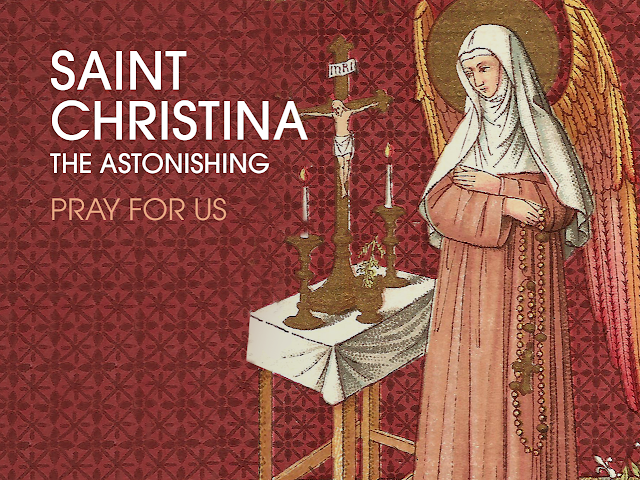 Patron Saint of the mentally ill, mental health workers and millers
Biography:
also known as Christina Mirabilis, was a holy woman born in Brustem (near Sint-Truiden), Belgium. (c.1150 – 24 July 1224)
Born to a peasant family, orphaned as a child, and raised by two older sisters. At age 21, she experienced a severe seizure of what may have been epilepsy. It was so severe as to be cateleptic, and she was thought to have died. During her funeral Mass, she suddenly recovered, and levitated to the roof of the church. Ordered down by the priest, she landed on the altar and stated that she had been to hell, purgatory, and heaven, and had been returned to earth with a ministry to pray for souls in purgatory.
Her life from that point became a series of strange incidents cataloged by a Thomas de Cantimpré, Dominican professor of theology at Louvain who was a contemporary who recorded his information by interviewing witnesses, and by Cardinal Jacques de Vitny who knew her personally. She exhibited both unusual traits and abilities. For example, she could not stand the odor of other people because she could smell the sin in them, and would climb trees or buildings, hide in ovens or cupboards, or simply levitate to avoid contact.
She lived in a way that was considered poverty even in the 13th century, sleeping on rocks, wearing rags, begging, and eating what came to hand. She would roll in fire or handle it without harm, stand in freezing water in the winter for hours, spend long periods in tombs, or allow herself to be dragged under water by a mill wheel, though she never sustained injury. Given to ecstasies during which she led the souls of the recently dead to purgatory, and those in purgatory to paradise.
People who knew her were divided in their opinions: she was a holy woman, touched of God, and that her actions and torments were simulations of the experiences of the souls in purgatory; she was suffering the torments of devils; or she was insane. However, the prioress of Saint Catherine’s convent testified that no matter how bizarre or excessive Christina’s reported actions, she was always completely obedient to the orders of the prioresses of the convent. Christina was a friend of Louis, Count of Looz, whose castle she visited, and whose actions she rebuked. Blessed Marie of Oignies thought well of her, and Saint Lutgardis sought her advice.
​
https://en.wikipedia.org/wiki/Christina_the_Astonishing
https://www.catholic.org/saints/saint.php?saint_id=148