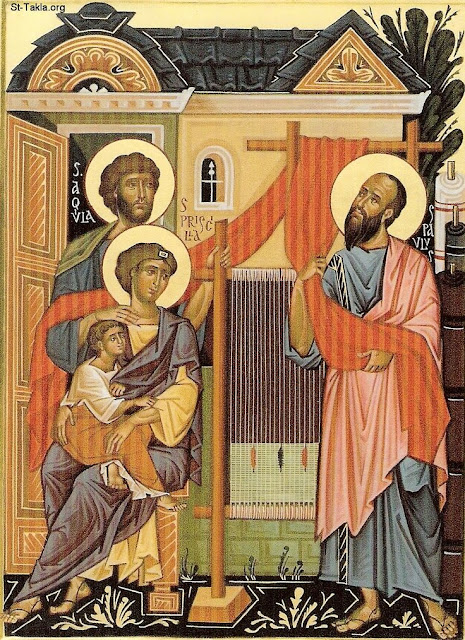 19 The churches in the province of Asia send you greetings. Aquila and Priscilla greet you warmly in the Lord, and so does the church that meets at their house. 20 All the brothers and sisters here send you greetings. Greet one another with a holy kiss. (1 Corinthians 16:19-20)
Saints Priscilla and Aquila were tentmakers, sharing the same profession as Saint Paul, which is likely why he stayed with them. Priscilla and Aquila had likely been exiled from Rome by the order of Emperor Claudius who forbade Jews to live within the city walls. Following his time in Corinth, we learn in Acts of the Apostles that the holy couple—who Paul likely converted—accompanied him to Ephesus and worked alongside him for three years. It was in their home that Mass was likely celebrated.
1 After this, Paul left Athens and went to Corinth. 2 There he met a Jew named Aquila, a native of Pontus, who had recently come from Italy with his wife Priscilla, because Claudius had ordered all Jews to leave Rome. Paul went to see them, 3 and because he was a tentmaker as they were, he stayed and worked with them.

God of grace and might, we praise thee for thy servants Priscilla and Aquila, whom thou didst plenteously endow with gifts of zeal and eloquence to make known the truth of the Gospel. Raise up, we pray thee, in every country, heralds and evangelists of thy kingdom, that the world may know the immeasurable riches of our Savior, Jesus Christ our Lord, who liveth and reigneth with thee and the Holy Spirit, one God, now and for ever. Amen.
Shared from 365 Rosaries