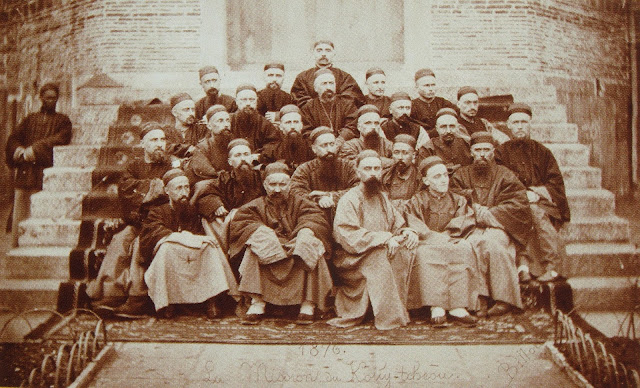 Christianity arrived in China by way of Syria in the 600s. Depending on China's relations with the outside world, Christianity over the centuries was free to grow or was forced to operate secretly.
The 120 martyrs in this group died between 1648 and 1930. Most of them (87) were born in China and were children, parents, catechists or laborers, ranging from nine years of age to 72. This group includes four Chinese diocesan priests.
Prayer: All-powerful, ever-living God, turn our weakness into strength. As you gave Augustine Zhao Rong and the martyrs of China the courage to suffer death for Christ, give us the courage to live in faithful witness to you. Grant this through our Lord Jesus Christ, your Son, who lives and reigns with you and the Holy Spirit, one God, for ever and ever. Amen. (from The Roman Missal)
The 33 foreign-born martyrs were mostly priests or women religious, especially from the Order of Preachers, the Paris Foreign Mission Society, the Friars Minor, Jesuits, Salesians and Franciscan Missionaries of Mary.
Augustine Zhao Rong was a Chinese solider who accompanied Bishop John Gabriel Taurin Dufresse (Paris Foreign Mission Society) to his martyrdom in Beijing. Augustine was baptized and not long after was ordained as a diocesan priest. He was martyred in 1815.
Beatified in groups at various times, these 120 martyrs were canonized in Rome on October 1, 2000.

The People's Republic of China and the Roman Catholic Church each have well over a billion members, but there are over 12 million Catholics in China. The reasons for that are better explained by historical conflicts than by a wholesale rejection of the Good News of Jesus Christ. The Chinese-born martyrs honored by today's feast were regarded by their persecutors as dangerous because they were considered allies of enemy, Catholic countries. The martyrs born outside China often tried to distance themselves from European political struggles relating to China, but their persecutors saw them as Westerners and therefore, by definition, anti-Chinese. The Good News of Jesus Christ is intended to benefit all peoples; today's martyrs knew that. May 21st-century Christians live in such a way that Chinese women and men will be attracted to hear that Good News and embrace it.
Edited Text shared from American Catholic - Image Google Images