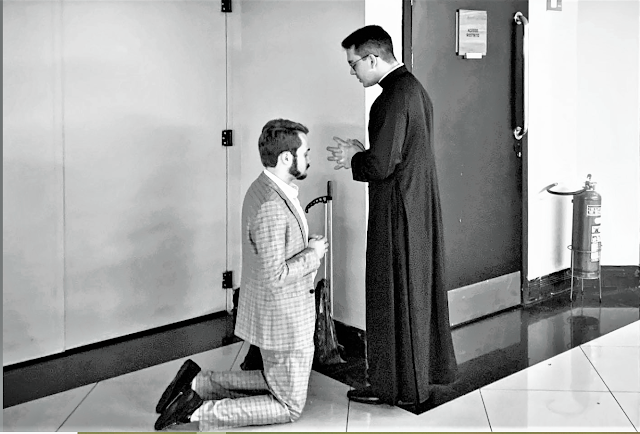 A Catholic priest named Fr. Matheus Aquino, from Brazil, recently was asked to hear a Confession while at a movie theater. His friend, Pedro Delfino, captured the moment on Instagram. Pedro wrote a touching note, accompanying the picture, about the beauty and sacrifice that being a priest requires:
Priesthood is not a profession. The priest is not a priest from 9 am to 6 pm, Monday to Friday. But every day, 100% of the time, no day off, weekend or retirement.
As Saint Paul says in 1 Cor 7:35, those who are consecrated to the religious life opt for an “integral dedication to the Lord”. The priest gives his life to God, without sharing it with anything else.
Therefore, if the cassock is their “work uniform”, the custom of the ancients of always being dressed in their priestly armor makes sense.
After all, the priest never stops exercising his office.
Yesterday, my friend @pematheusaquino was surprised at the cinema door with the request of a stranger who approached him wanting to confess right there. What a beautiful scene.
He doesn't even know I took this picture and he's certainly going to see it for the first time now, along with you. But I couldn't resist and registered the moment, as this scene immediately reminded me of the words of Dom Justino, who said: “The cassock is the liturgy of the street. The person who sees is obliged to think of God.”
In fact. How many people didn't pass by in that brief moment and were impacted by this unusual scene?
How many internal reflections, silent admiration and hidden interests did that moment not arouse, apart from the sacrament itself administered there?
None of this would have happened if he had been wearing jeans and a polo shirt.
In fact, with each public appearance of a priest in a cassock, wherever he goes, souls may be being influenced to turn to God without the priest even knowing it!
Literally, by the force of “habit”.
I think I can speak for the laity when I say that we are thirsty for the Tradition of the Church. And a big reason that people have lost faith today is the fact that many religious leaders have decided to be more “normal” and “modern” than the laity themselves.
We need a moral reserve in society that will always bring us back to the beauty of Tradition. And if not the clergy, who will fulfill this role?
Fathers and seminarians of my Instagram, reflect on this and do not despise the great gift to which you were called.
Thank you @pematheusaquino for your example of TOTAL surrender to God.
Source: