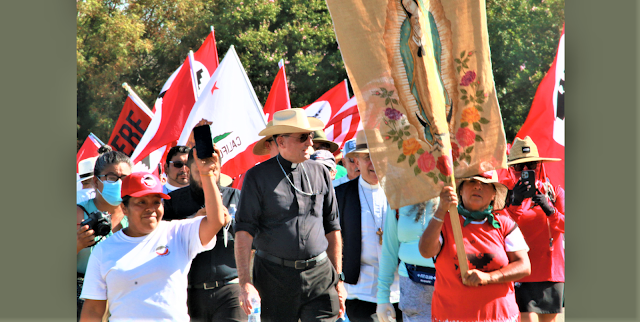 2 Catholic Bishops in Fresno, California, USA, joined the United Farm Workers in a march in support of a Bill on Agricultural Labor Relations.
This bill, 2183, makes it possible for farmworkers to vote via mail-in ballots during union elections. Bishop Brennan gave the marchers his blessing.
DIOCESE OF FRESNO’S LEGACY FOR SUPPORTING FARMWORKERS

August 18, 2022
After the recent participation of Bishop Brennan and Bishop Emeritus Ochoa at the United Farm Workers March for the Governor’s signature, let’s look back at a past event.
In 1948, a U.S. Immigration plane crash happened near Coalinga, CA with no survivors. News reports swarmed the tragedy yet failed to name the 28 migrant farmworkers who died in the crash - despite publicly naming the pilot, etc. Their gravestone read, “28 Mexican Citizens who died in an airplane accident near Coalinga, California on Jan. 25, 1948. R.I.P.”
Tim Z. Hernandez, an author, and Carlos Rascon, Director of Catholic Cemetries, worked together to get the names of the 28 Mexican nationals. After much effort, the names were found.
The Diocese of Fresno teamed up to raise money for a memorial scroll to include all their names. In 2013, the Diocese of Fresno held mass at Holy Cross Catholic Cemetry in Fresno where the names of the farmworkers who died were read.
“It was wonderful to recognize the people who were once ‘unnamed’... even one of the families were able to attend the Mass,” Bishop Emeritus Ochoa, who was the celebrant of the Mass and at the time, active Bishop, stated.
With the recent UFW March, the Diocese of Fresno and our Bishops continue to stand with farmworkers and support the AB2183 to be signed into law.
https://dioceseoffresno.org/news/diocese-of-fresnos-legacy-for-supporting-farmworkers

Bishop Brennan blessed the marchers as they entered the rally at Calwa Recreational Park – ending day 9 of their 24-day, 355-mile march! pic.twitter.com/VNOex7fzQJ