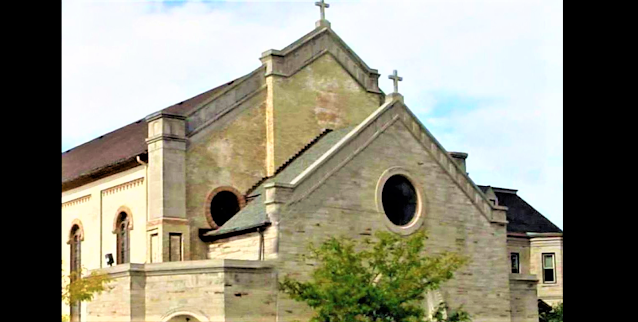 Fire Breaks Out at St. James Catholic Church (Built circa 1853)
ROCKFORD--A tragic fire broke out in the roof of St. James Catholic Church, 428 North Second Street, Rockford just before 7 a.m. today, Monday, Aug. 8, 2022. Although the fire may have been caused by a lightning strike during this morning’s thunderstorms, the official cause is not yet determined.
No one was present inside the buildings at the time of the fire and the pastor, Father Jhonatan Sarmiento, was able to safely remove the Blessed Sacramento from the interior. Rockford Firefighters were able to immediately respond and quickly contain the fire.
The Diocese of Rockford is fully cooperating with the Rockford Fire Department as the Department completes its work to assess the stability of the church building and report its findings to the diocesan administration. As soon as it is possible and pending that report, the diocese will then conduct an assessment of the church’s interior. Insurance adjusters for the Diocese of Rockford were on scene this morning, and will assess the damage as soon as it is safe to do so. Determination on damages and the extent of the next steps to be taken in regard to any, and all repairs will be made at that time. Information about alternative arrangements for Masses will be announced by St. James Parish Office.
Bishop David Malloy extends his profound gratitude to all the first responders, the vigilant neighbors and all those around the diocese who have offered prayers during this extremely sad and unfortunate event. Prayers are also being offered for those three courageous firefighters reported to have sustained injuries while fighting this fire. Footage from the fire can be seen on the Diocese of Rockford Facebook page.
Press Release Diocese of Rockford: https://www.rockforddiocese.org/article/?id=820