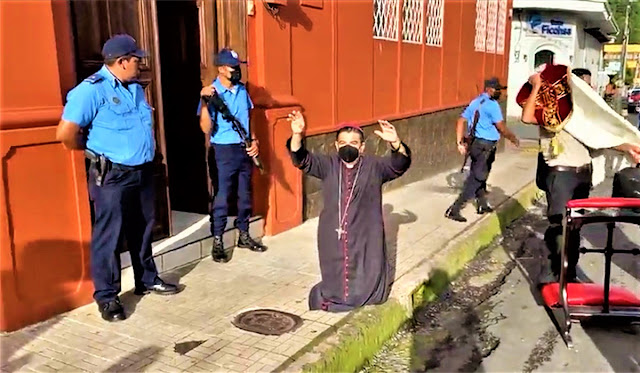 In Nicaragua, central America, police broke into the Catholic Diocese of Matagalpa headquarters and abducted Bishop who had been under house arrest for more than two weeks. Other priests, seminarians and laity were taken (see FB image below) in separate vehicles. Only Bishop Oscar Escoto remained in the curia. 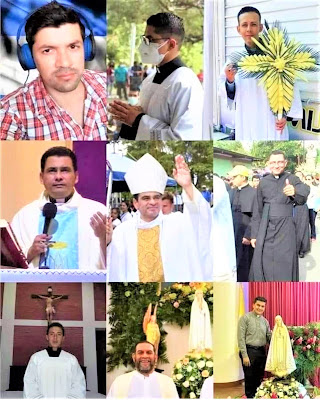 It was in the early morning hours of August 19, that police raided the curia and took Bishop Rolando Álvarez, according to a social media statement from the Diocese of Matagalpa. The Bishop’s location is unknown. The bishop had been detained in the diocesan office for 16 days with 11 others as police maintained a constant presence outside.
Nicaragua’s National Police said in an August 5th statement that the bishop was under investigation for “trying to organize violent groups, inciting them to execute acts of hate against the population, provoking an environment of chaos and disorder, disturbing the peace and harmony in the community with the objective of destabilizing the Nicaraguan state and attacking the constitutional authorities.”
The Diocese of Matagalpa requested prayers for the bishop and others abducted by the Ortega government, on Facebook they posted this prayer: “Lord Jesus, good shepherd, grant our Bishop the grace of persevering and continuous prayer, the joy of communion with his priests and religious and the joy of serving his people with a generous spirit. “Merciful Lord, permit him to proclaim the wonders of your love, announce the only true God and experience him in the charity of all, principally the poorest, the sick, and the penitents. May his heart be attentive to the anguish and the hopes of his flock, may he be faithful to the mission of encouraging hope and to work tirelessly for justice. "We entrust him to your Divine Mercy, to Our Lady of Mercy, the intercession of Sister Faustina Kowalska, and Pope Saint John Paul II. Amen.
On August 11th, the Vatican, at the Special Session of the OAS Permanent Council focusing on the situation in Nicaragua, expressed concern over the treatment of religious in the country. Msgr. Juan Antonio Cruz Serrano, the Holy See's Permanent Observer noted in a statement that, "the Holy See cannot fail to express its concern in this regard, while assuring those who are committed to dialogue as an indispensable instrument of democracy and guarantor of a more humane and fraternal civilization that it always wishes to collaborate with." He added that "the Holy See appeals to the parties to find ways of understanding, based on respect and mutual trust, seeking above all the common good and peace."
The government forcefully closed several Catholic radio stations in the Diocese of Matagalpa and police confiscated equipment. During his house arrest, the bishop and companions had released a series of social media videos:
“We have to respond to hate with love, despair with hope, and fear with the strength and courage given to us by the glorious and resurrected Christ,” he said one video posted on social media. Nicaraguan President Daniel Ortega has arrested priests, expelled the Missionaries of Charity and apostolic nuncio from the country and closed Catholic media outlets and educational and charitable projects. A priest, Father Oscar Benavides, was detained in the Diocese of Siuna on August 14 and has been imprisoned in the El Chipote political prison, according to a source.
CONFERENCE
EPISCOPAL
Statement from the Episcopal Conference of Nicaragua
The Episcopal Conference of Nicaragua, faced with the situation that our
brother in the episcopate, Bishop Rolando José Álvarez Lagos, we want
express our fraternity, friendship and episcopal communion with him, since this situation touches our hearts as Nicaraguan Bishops and Church, "Well, if a member suffers, we all suffer with him (1 Co 2, 26)”.
In addition, we express the feeling of our Church, that, by nature;
“proclaims the Gospel of Peace, and is open to collaboration with all
national and international authorities to take care of this universal good
so great (Benedict XVI, Address to the Roman Curia, December 21,
2012)”, and thus, together let us build that Civilization of Love, of which we have always
Pope Saint John Paul II spoke to us
Facing the National Marian Congress, we invite the Holy People of God to
raise and offer prayers and rosaries to Our Lady the Immaculate
Conception of Mary, patron saint of Nicaragua.
Given at the headquarters of the Episcopal Conference of Nicaragua, seven days after
month of August of the year two thousand and twenty-two.
Sources: https://cen-nicaragua.org/wp-content/uploads/2022/08/ComunicadoCEN_070822.pdf
https://www.facebook.com/CENicaragua/
Catholic News Service and Vatican News