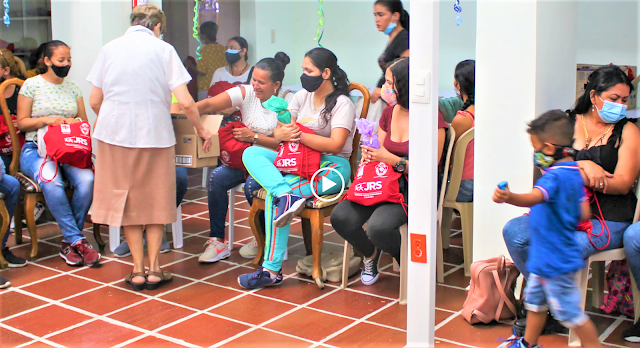 July 30 was the International Day Against Trafficking in Persons. On the occasion of this date, the religious Adorers, Slaves of the Blessed Sacrament and of Charity, show the project they are developing in the city of Cúcuta (Norte de Santander, Colombia) bordering Venezuela, rescuing women from prostitution for 27 years.

Colombia has eight official crossings with Venezuela, in addition to 74 “trochas”, or informal border crossings, of which the number of immigrants who cross them is unknown.

The deterioration of the economy and the social situation in Venezuela over the past two decades and its worsening in recent years has meant that the number of people entering Colombia from Venezuela in search of a better life has increased enormously, reaching almost 2 million people.

However, the religious Adorers, Slaves of the Blessed Sacrament and Charity, settled in the area long before the current crisis began in Venezuela.

Sister María Soledad Arias founded the “Casa Hogar” 27 years ago in Cúcuta, where the Adorers take women and adolescents who are victims of prostitution. Since then they have helped some 4,000 young people to get out of trafficking networks.

It is an indispensable place in the fight against trafficking because it is located in a strategic enclave in this humanitarian crisis and in which the situation has only worsened in recent years.

“I ask the girls why they come to Colombia, and they tell me that in Venezuela it is worse. They are moved by hunger, they can't find what to give the children to eat, they lack opportunities and work”, explains Sister María Soledad, head of the Casa Hogar.

That is why the Adorers play an essential role in the liberation of women who want to recover their lives after falling into prostitution and trafficking.

“It is about alleviating the pain, listening to them, telling them that there is a God who loves them and who manifests himself in the Adorers because we were founded for them,” the nun points out.

The sisters who run this house carry out this work by training young women so that they can have entrepreneurial options that distance them from networks of sexual exploitation.

Through listening centers such as the so-called "Ancla" or "sparks" workshops, the Esclavas del Santísimo Sacramento y de la Caridad teach handicrafts so that young women can market them and help them to promote their new life. At the end of the workshop they are given food and a personal hygiene kit or, if applicable, a kit for babies or pregnant women.

One of the women who came out of trafficking in Cúcuta (Norte de Santander, Colombia) thanks to the Casa Hogar de las Adoratrices is María Inés Herrero, who now dedicates herself to repaying that help and, together with the sisters, collaborates in getting girls out of prostitution.

“In 2009 I ended up cheated by a job that they told us, but they took us to prostitution. Arriving in Colombia is hard because you don't have a family, there's no job and she gets to do things that she doesn't know she's going to do over time,” she explained.

María Inés is a fundamental piece in the work of the Adorers, carrying the message of liberation from Santa María Micaela to the young people who are on the street in Cúcuta and surroundings.