Feast August 15 : Assumption of Mary into Heaven the Solemnity Remembering when Mary was taken to Heaven - a Holy Day of Obligation 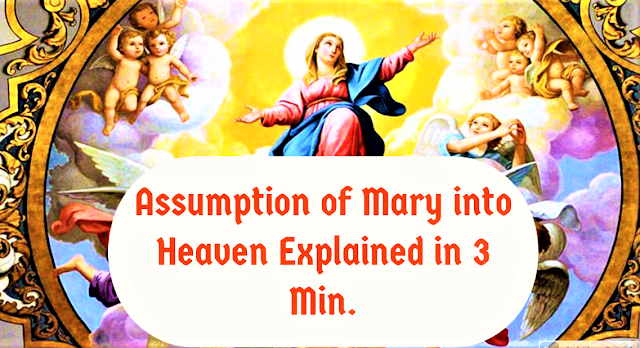 The Eastern Churches call Mary's assumption the Dormition of the mother of God. Dormition means sleep. Her assumption may have occurred in Ephesus where she lived with Saint John after the death of Jesus. However, many believe it occurred in Jerusalem at the location of the Church of the Assumption in Jerusalem. References to the Feast of the Assumption being celebrated since the time of the Apostles date back to sermons in the 4th century today it is considered one of the solemn feast days of the universal Church it is celebrated by all Latin Rite and Eastern Rite Catholics. In some countries including the United States it is a holy day of obligation to attend Mass on August 15th. The faithful remember the Assumption of Mary during the fourth glorious mystery of the Holy Rosary.

God has taken others into heaven body and soul as revealed in the Bible. Genesis and Hebrews reveal that Enoch was taken bodily by God and in 2nd Kings chapter 2 the prophet Elijah is said to have been taken bodily into heaven.
In the bible we find the passage of Revelation chapter 11:19 to 12:1, which allude to Mary: