FULL TEXT Homily - Pope Francis says that Jesus asks "...Brother Cardinals, can I count on you?" at Creation of 20 New Cardinals and 2 New Saints - VIDEO 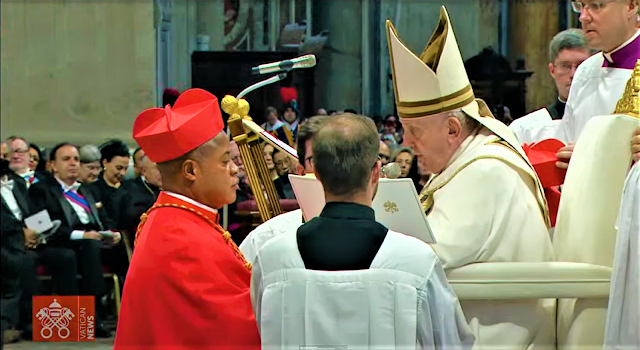 On Saturday, the 27th of August, for Pope Francis' eighth Consistory,  he created 20 new cardinals, 16 of whom are electors in a future Conclave, and four non-electors, over the age of 80. The celebration marks a universal Consistory, with Church leaders from the five continents. It was also be a "mixed" Consistory with the creation of the 20 new cardinals, with a vote shortly afterwards on the causes for canonization of two Blesseds.
PUBLIC ORDINARY CONSISTORY FOR THE CREATION OF NEW CARDINALS
AND FOR THE VOTE ON SOME CAUSES OF CANONIZATION
FULL TEXT HOMILY OF THE HOLY FATHER FRANCIS
Basilica of Saint Peter
Saturday, August 27, 2022
This saying of Jesus, right in the middle of Luke's Gospel, strikes us like an arrow: "I have come to cast fire on the earth, and how I wish it were already lit!" (12.49).
While on his way with the disciples to Jerusalem, the Lord makes an announcement in a typical prophetic style, using two images: fire and baptism (cf. 12: 49-50).

The fire must bring him into the world; baptism will have to receive it Himself. I only take the image of the fire, which here is the powerful flame of the Spirit of God, it is God himself as "devouring fire" (Dt 4,24; Heb 12:29), passionate Love that purifies, regenerates and transfigures everything. This fire - as indeed also "baptism" - is fully revealed in the paschal mystery of Christ, when he, as a burning pillar, opens the way of life through the dark sea of ​​sin and death.
However, there is another fire, that of embers. We find it in John, in the account of the third and last appearance of the risen Jesus to the disciples, on the lake of Galilee (cf. 21: 9-14).