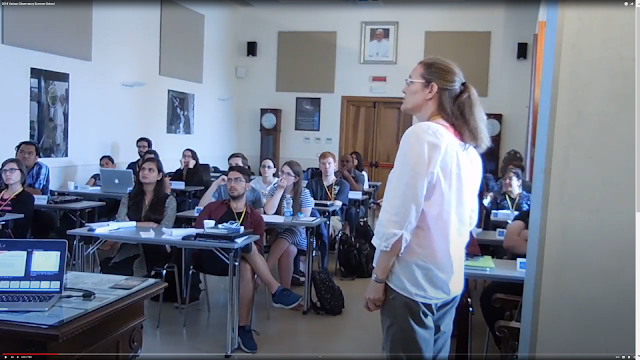 Since 1986, the Vatican Observatory has hosted biennial Summer Schools at Castel Gandolfo to give young scientists from around the world an opportunity to learn with the world’s leading experts in astronomy.
Alumni from the schools continue to lead in many areas of astronomical research. Among them are Fernando Comeron, Deputy Director for Science of the European Southern Observatory; Heino Falcke, chair of Science Council of the Event Horizon Telescope, which achieved the first image of a black hole in 2019; and Ray Jayawardhana, Harold Tanner Dean of the College of Arts and Sciences and a professor of astronomy at Cornell University.

Programs
Summer Schools
VOSS (Vatican Observatory Summer School)
In 1985, Fr. Martin McCarthy SJ realized that, because the Observatory does not give degrees, we had little chance for contact with young people. That was a shame, he thought, since they are not only the promise for the future of the field, but also often among the most active and imaginative researchers even now.
How could this be solved?
He hit upon the idea of a regular month-long summer school to be held at the Observatory at Castel Gandolfo on some special topic in astronomy and astrophysics.
A year later, the Vatican Observatory Summer School program was born. Since then, the Observatory has held such a school roughly every two years.
The schools are open to advanced undergraduates and beginning graduate students in astronomy from around the world; more than 55 nations have been represented so far.
The only rules limiting who can attend are that the students must show evidence of likely success as professional astronomers; and no more than two students from any given nation are accepted.
The Next Summer School will be held in June 2023 - You can apply here:
https://www.vaticanobservatory.va/en/education/voss/voss-2023
MAIN THEMES 1) Science drivers for obtaining large astronomical datasets 2) Numerical simulations 3) Tools for accessing and analyzing images, catalogs, and other datasets 4) Machine learning and deep learning methods and tools And  a lot of projects to be realised by the students during the school
Source: https://www.vaticanobservatory.org/education/summer-school/