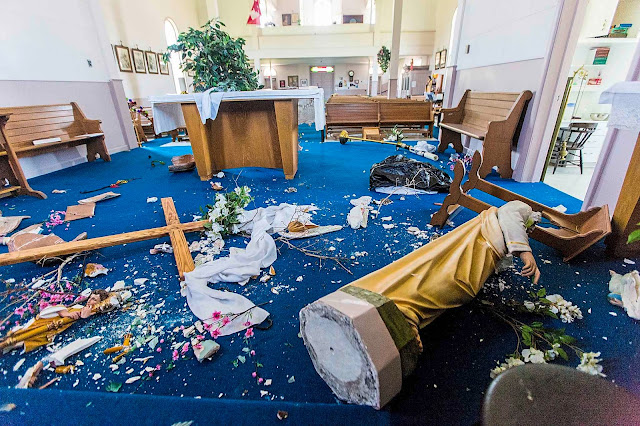 The Canadian Catholic Civil Rights League in Toronto, released reported findings on August 4, 2022.  On August 2, Statistics Canada released a report on police reported violent crime in Canada, revealing that the largest increase in targeted crime occurred against Catholics, with a 260 percent increase between 2020 and 2021.

Mainstream media has reported the overall 27 percent increase, but the most staggering of all increases, the 260 percent rise in anti-Catholic hate crimes, has been largely ignored.

The CCRL will fulfill our mandate to work with the media to ensure that anti-Catholic defamation and indeed anti-Catholic violence will not be tolerated. Our politicians must speak out against this alarming trend and law enforcement officials must vigorously investigate all incidents of hate crimes against Catholics and charge those responsible.

The League continues to update our Church Attacks Database, accessible from www.ccrl.ca  cataloguing attacks against Catholic churches in Canada ranging from the breaking of stained-glass windows, to acts of desecration and church burnings.

The Church Attacks Database provides a means by which people can report to us new incidents, or provide us with additional information and photos of existing entries by clicking on the link, Report an Attack at a Church or Religious Site from the database in www.ccrl.ca.

The CCRL is providing Canada’s only nationwide database that tracks and records attacks against our churches and other Catholic properties. We also wish to maintain a record of arrests and convictions from such attacks. We will follow through to make sure that law enforcement responds with vigor to this alarming trend in anti-Catholic violence.