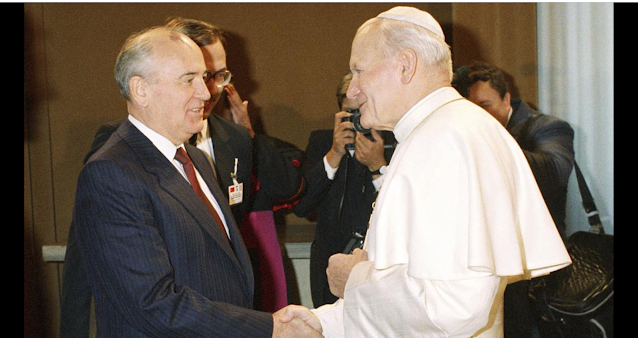 Mikhail Gorbachev, former head of the Soviet Union, has died at the age of 91.  Gorbachev died at hospital in Moscow, Russia, on August 31st, 2022. following a lengthy illness at the age of 91. Gorbachev and his wife Raisa (died 1999 of cancer) were baptized Christians in the Russian Orthodox Church. There is much speculation that, although he was forced to publicly pronounce himself an atheist, he was in fact a Christian. Accompanied by his daughter Irina, Mr Gorbachev spent half an hour on his knees in silent prayer at the tomb of St. Francis in 2008. In 1989 he met with Pope John Paul II at the Vatican.

Mikhail Gorbachev will be buried next to his wife's grave at the cemetery of Moscow’s Novodevichy Convent, according to Reuters.
Pope Francis sent a telegram of condolences on Wednesday to the former Soviet statesman’s daughter, Ms. Irina Gorbachev:
Spiritually close in this moment of pain for the death of your honorable father Mikhail, I would like to give heartfelt condolences to you, to all the families and to those who have seen in him a valued state man. In remembering with gratitude the long-lasting commitment to concord and fraternity between people, as well as for the progress of your country in a time of important changes, I elevate prayers of suffrage, invoking for his soul from the good and merciful God.

Gorbachev helped lift the Iron Curtain, leading to the dissolution of the Soviet Union, and initiated relations with the Holy See, putting an end to decades of religious persecutions against the Catholic Church in the former USSR. Mikhail Gorbachev was also a Nobel Peace Prize Laureate, and the last president of the Soviet Union before its dissolution in 1991. A member of the Communist Party of the Soviet Union since the early fifties, Mr. Gorbachev was its general secretary from 1985 to 1991 and Soviet president from 1990 to 1991.
During his seven-year presidency, he introduced key political and economic reforms to the USSR, the so-called “Peretrojka” (Reconstruction), and “Glasnost” (Transparency). He played a crucial role in ending the Cold War, which earned him the Nobel Peace Prize in 1990 and widespread popularity in the West, but not at home, where some Russians have blamed him for the economic downfall that ensued in Russia in the 1990s.
Pope John Paul II and Mikhail Gorbachev developed a personal relationship that helped improve relations between the Vatican and the Soviet Union, and lead to the eventual opening of the Soviet regime.
Sources: Vatican News and  https://press.vatican.va/content/salastampa/it/bollettino/pubblico/2022/08/31/0635/01284.html
https://wwrn.org/articles/28051/