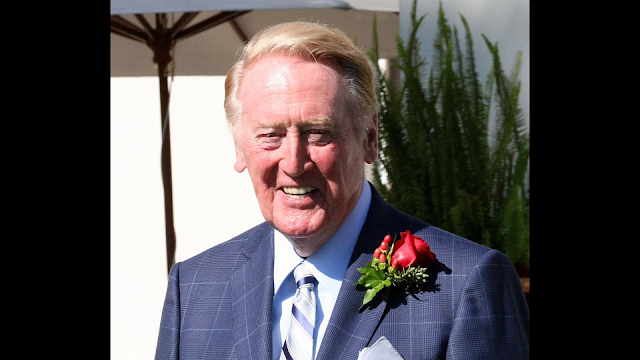 Vincent Edward Scully (November 29, 1927 – August 2, 2022) was an American sportscaster. He was best known for his 67 seasons calling games for Major League Baseball's Los Angeles Dodgers, beginning in 1950 and ending in 2016.
On the evening of August 2, 2022, Scully died at his home in Hidden Hills, California, at the age of 94.
Scully's tenure with the Dodgers was the longest of any broadcaster with a single team in professional sports history. He retired at age 88 in 2016, ending his record-breaking run as the team's announcer. He was known for his distinctive voice, lyrically descriptive style, and signature introduction to Dodgers games: "It's time for Dodger baseball! Hi, everybody, and a very pleasant good (afternoon/evening) to you, wherever you may be." He is considered by many to be the greatest baseball broadcaster of all time, according to fan rankings, Bleacher Report and Fox Sports.

In addition to Dodgers baseball, Scully called various nationally-televised football and golf contests for CBS Sports from 1975 to 1982, and was NBC Sports' lead baseball play-by-play announcer from 1983 to 1989. He also called the World Series for CBS Radio from 1979 to 1982 and again from 1990 to 1997.


Personal life
In 1972, Scully's 35-year-old wife Joan Crawford died of an accidental medical overdose; the couple had been married for 15 years. In late 1973, he married Sandra Hunt, who had two children of her own, and they soon had a child together. Scully's eldest son, Michael, died in a helicopter crash at the age of 33.
Scully, a devout Roman Catholic, said in numerous interviews that he credited his religious faith and being able to dive back into his work with helping him ease the burden and grief from losing his wife and son.
He encouraged devotion to the Virgin Mary, saying, "Her prayers are more powerful than those of the rest of heaven combined. No one was closer or more devoted to Christ on earth, so it only makes sense to see the same thing in heaven. Now, the Blessed Virgin seeks to help her spiritual children get home to spend eternity with her Son." In 2016, Scully narrated an audio recording of the Rosary for Catholic Athletes for Christ in which he recites the Rosary mysteries and leads a group of responders.

Scully had four children, two stepchildren, sixteen grandchildren, and three great-grandchildren. He resided in Hidden Hills, California, and attended St. Jude the Apostle Church in Westlake Village, California.
Vin and his second wife Sandra were married for 48 years until Sandra's death from amyotrophic lateral sclerosis on January 3, 2021.
On the evening of August 2, 2022, Scully died at his home in Hidden Hills, California, at the age of 94.
Source: Wikipedia