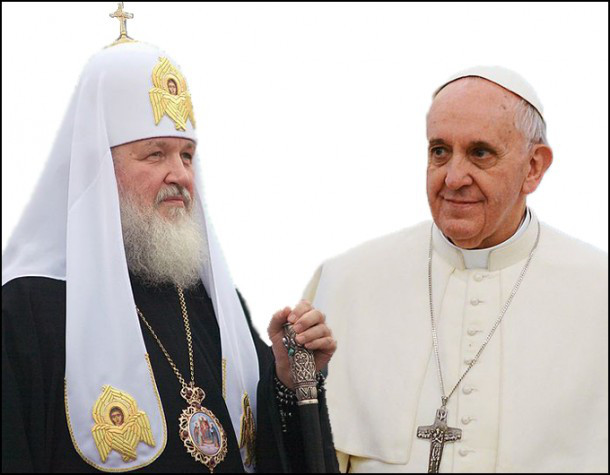 The foreign ministry head of the Russian Orthodox Church explains that the Moscow Patriarch, is not attending the World Religions Congress in the Kazakh capital Nur-Sultan  Moscow.
This was stated by the head of the foreign office of the Moscow Patriarchate, Metropolitan Antony (Sevryuk), according to the state news agency RIA Novosti (Wednesday evening). Thus, Pope Francis will not meet the Russian Orthodox Church leader at the interreligious conference. The Pope travels to Kazakhstan on September 13-15 to take part in the VII Congress of Leaders of World and Traditional Religions in Nur-Sultan. The Moscow Patriarchate will be represented with an official delegation at the congress on September 14-15, announced Metropolitan Antony. Patriarch Cyril I himself will not take part. "Accordingly, a meeting with Pope Francis in Kazakhstan is not planned."
According to the Russian-Orthodox foreign ministry head, a meeting between the patriarch and the pope "cannot take place on the sidelines" of another event because of its special importance - "even if it is an event as important as the congress of leaders of world and traditional religions". , as Antony explained.
RIA Novosti quoted the metropolitan as saying that an encounter between Cyril and Francis must be prepared "extremely carefully", the agenda must be agreed and a resulting statement must be thought through in advance. Meanwhile, the website of the Moscow Patriarchate reported that a meeting between Metropolitan Antony and the papal nuncio to Russia, Archbishop Giovanni D'Agnello, took place on Wednesday. "Questions of mutual interest" were discussed, the brief communiqué said.
In addition, according to official information, Antony spoke on Wednesday with the Russian Orthodox Metropolitan of Astana, responsible for Kazakhstan, Alexander (Mogilev). There has been speculation for months about a possible meeting between the Pope and the Moscow Patriarch.   Patriarch Cyril I. has been under international criticism since the beginning of the Russian war of aggression against Ukraine because he publicly justified the attack several times. Metropolitan Antonij was received by Pope Francis for an audience in the Vatican on August 5th and also spoke to the Vatican's foreign representative, Archbishop Paul Gallagher, while in Rome.