Saint August 11 : St. Clare, Friend of St. Francis, who Saved the Town from Invaders with the Eucharist and Foundress of the Poor Clares and Patron of Television and Sore Eyes 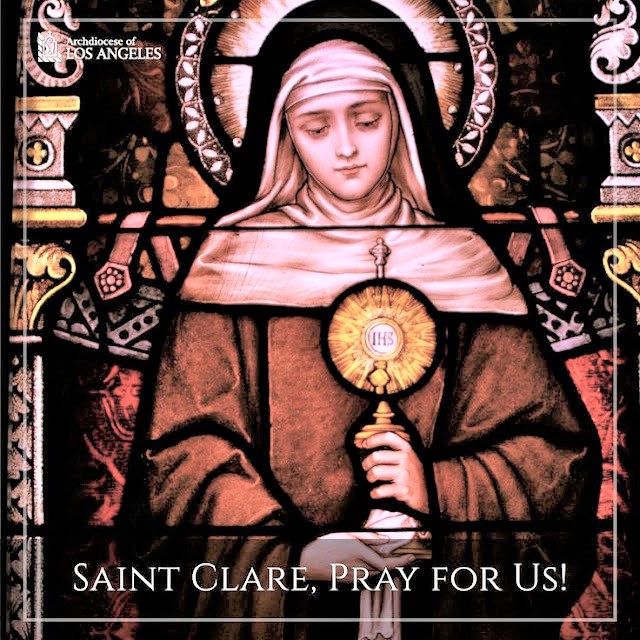 Cofoundress of the Order of Poor Ladies, or Clares, and first Abbess of San Damiano; born at Assisi, 16 July, 1194; died there 11 August, 1253.
She is the patron saint of; Eye disease,  goldsmiths,  laundry,  television,  bicycle messengers,  good weather,  needle-workers,  remote viewing,  extrasensory perception; Santa Clara,  California; Santa Clara Pueblo,  New Mexico; Obando,  Bulacan,  and the Philippines.
She was the eldest daughter of Favorino Scifi, Count of Sasso-Rosso, the  wealthy representative of an ancient Roman family, who owned a large palace in Assisi and a castle on the slope of Mount Subasio. Such at least is the traditional account. Her mother, Bl. Ortolana, belonged to the noble family of Fiumi and was conspicuous for her zeal and piety.From her earliest years Clare seems to have been endowed with the rarest virtues. As a child she was most devoted to prayer and to practices of mortification, and as she passed into girlhood her distaste for the world and her yearning for a more spiritual life increased. She was eighteen years of age when St. Francis came to preach the Lenten course in the church of San Giorgio at Assisi. The inspired words of the Poverello kindled a flame in the heart of Clare; she sought him out secretly and begged him to help her that she too might live "after the manner of the holy Gospel". St. Francis, who at once recognized in Clare one of those chosen souls destined by God for great things, and who also, doubtless, foresaw that many would follow her example, promised to assist her.
On Palm Sunday Clare, arrayed in all her finery, attended high Mass at the cathedral, but when the others pressed forward to the altar-rail to receive a branch of palm, she remained in her place as if rapt in a dream. All eyes were upon the young girl as the bishop descended from the sanctuary and placed the palm in her hand. That was the last time the world beheld Clare. On the night of the same day she secretly left her father's house, by St. Francis's advice and, accompanied by her aunt Bianca and another companion, proceeded to the humble chapel of the Porziuncula, where St. Francis and his disciples met her with lights in their hands. Clare then laid aside her rich dress, and St. Francis, having cut off her hair, clothed her in a rough tunic and a thick veil, and in this way the young heroine vowed herself to the service of Jesus Christ. This was 20 March, 1212.
Once,  during an enemy attack against Assisi,  and while the army was approaching the gates,  the fierce Saracens invaded San Damiano,  entered the confines of the monastery and even the very cloister of the sisters.
Saint Clare,  with a fearless heart,  sick as she was,  went to the enemy,  preceded by a silver and ivory case in which the Body of Christ,  Eucharist,  was kept with great devotion.
And prostrating herself before the Lord,  she spoke tearfully to her Christ: ‘Behold,  my Lord,  is it possible You want to deliver into the hands of pagans Your defenseless handmaids,  whom I have taught out of love for You?  I pray You,  Lord,  protect these Your handmaids whom I cannot now save by myself. ’ Suddenly a voice like that of a child resounded in her ears from the tabernacle: ‘I will always protect you! ’ ‘My Lord, ’ she added,  ‘if it is Your wish,  protect also this city which is sustained by Your love. ’ Christ replied,  ‘It will have to undergo trials,  but it will be defended by My protection. ’
Then the virgin,  raising a face bathed in tears,  comforted the sisters: ‘I assure you,  daughters,  that you will suffer no evil; only have faith in Christ. ’
Upon seeing the courage of the sisters,  the Saracens took flight and fled back over the walls they had scaled,  unnerved by the strength of she who prayed.
SOURCE: CATHOLIC ENCYCLOPEDIA