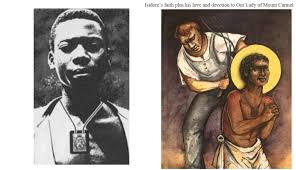 Bl. Isidore Bakanja, a member of the Boangi tribe, was born in Bokendela (Congo) between 1880 and 1890. In order to survive, even as a boy, he had to work as bricklayer or in farms. He was converted to Christianity in 1906. He was working in a plantation run by a colonialist in Ikili and was forbidden by the owner to spread Christianity among his fellow-workers.

On 22 April 1909, the superintendent of the business tore off the Carmelite Scapular, which Isidore was wearing as an expression of his Christian faith, and had him severely beaten even to drawing blood. He died on 15 August of the same year as a result of the wounds inflicted in "punishment" for his faith and which he bore patiently while forgiving his aggressor. He was beatified by Pope John Paul II on 24 April 1994.

Isiidore Bakanja worked as an assistant mason for white colonists in what was then the Belgian Congo and later known as Zaire. Convert, baptized 6 May 1906 at age 18 after receiving instruction from Trappists missionaries. Rosary in hand, he used any chance to share his faith; though untrained, many thought of him as a catechist. He left his native village because there were no fellow Christians.

He further worked as a domestic on a Belgian rubber plantation. Many of the Belgian agents were atheists who hated missionaries due to their fight for native rights and justice; the agents used the term "mon pere" for anyone associated with religion. Isidore encountered their hatred when he asked leave to go home. The agents refused, and he was ordered to stop teaching fellow workers how to pray: "You'll have the whole village praying and no one will work!" He was told to discard his Carmelite scapular, and when he didn't, he was flogged twice. The second time the agent tore the scapular from Isidore's neck, had him pinned to the ground, and then beaten with over 100 blows with a whip of elephant hide with nails on the end. He was then chained to a single spot 24 hours a day.

When an inspector came to the plantation, Isidore was sent to another village. He managed to hide in the forest, then dragged himself to the inspector. "I saw a man," wrote the horrified inspector, "come from the forest with his back torn apart by deep, festering, malodorous wounds, covered with filth, assaulted by flies. He leaned on two sticks in order to get near me - he wasn't walking; he was dragging himself". The agent tried to kill "that animal of mon pere", but the inspector prevented him. He took Isidore home to heal, but Isidore knew better. "If you see my mother, or if you go to the judge, or if you meet a priest, tell them that I am dying because I am a Christian."

Two missionaries who spent several days with him reported that he devoutly received the last sacraments. The missionaries urged Isidore to forgive the agent; he assured them that he already had. "I shall pray for him. When I am in heaven, I shall pray for him very much." After six months of prayer and suffering, he died, rosary in hand and scapular around his neck.