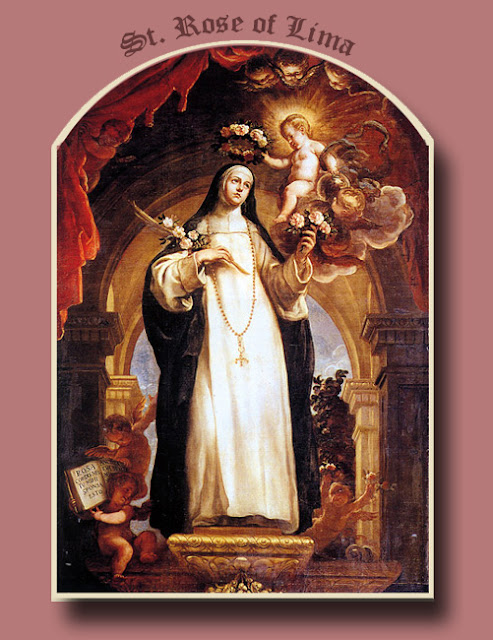 Virgin, patroness of America, born at Lima, Peru 20 April, 1586; died there 30 August, 1617.
At her confirmation in 1597, she took the name of Rose, because, when an infant, her face had been seen transformed by a mystical rose. As a child she was remarkable for a great reverence, and pronounced love, for all things relating to God. This so took possession of her that thenceforth her life was given up to prayer and mortification. She had an intense devotion to the Infant Jesus and His Blessed Mother, before whose altar she spent hours. She was scrupulously obedient and of untiring industry, making rapid progress by earnest attention to her parents' instruction, to her studies, and to her domestic work, especially with her needle.
(Biography continues after prayer)
Prayer to St. Rose of Lima(This prayer can be used as a Novena if repeated over 9 days)
Admirable Saint Rose, you were truly a sweet flower blooming on a rugged soil; you were indeed a rose among thorns, bearing with meekness and patience the stings of envious tongues, and preserving perfect purity and modesty amid the alluring blandishments of a deceitful world. To the sufferings inflicted on you by others you added the voluntary tortures of fasting and watching, of the discipline, of the crown of thorns and of the hair shirt, to subdue the flesh and to make yourself like to your heavenly Spouse. By the merits which you have thus gained with your divine Bridegroom, obtain for me the grace to bear my afflictions with patience, to remain pure and modest, to be meek and humble, to be faithful to the inspirations of the Holy Spirit, and so to mortify my passions that I may be ever more pleasing and acceptable in the sight of my dear Lord and Saviour, Jesus Christ, Who liveth and reigneth world without end. Amen. (Say 1 Our Father, 1 Hail Mary and 1 Glory Be)
***********************************************************
After reading of St. Catherine she determined to take that saint as her model. She began by fasting three times a week, adding secret severe penances, and when her vanity was assailed, cutting off her beautiful hair, wearing coarse clothing, and roughening her hands with toil. All this time she had to struggle against the objections of her friends, the ridicule of her family, and the censure of her parents. Many hours were spent before the Blessed Sacrament, which she received daily.
Finally she determined to take a vow of virginity, and inspired by supernatural love, adopted extraordinary means to fulfill it. At the outset she had to combat the opposition of her parents, who wished her to marry. For ten years the struggle continued before she won, by patience and prayer, their consent to continue her mission.
At the same time great temptations assailed her purity, faith, and constance, causing her excruciating agony of mind and desolation of spirit, urging her to more frequent mortifications; but daily, also, Our Lord manifested Himself, fortifying her with the knowledge of His presence and consoling her mind with evidence of His Divine love. Fasting daily was soon followed by perpetual abstinence from meat, and that, in turn, by use of only the coarsest food and just sufficient to support life.
Her days were filled with acts of charity and industry, her exquisite lace and embroidery helping to support her home, while her nights were devoted to prayer and penance. When her work permitted, she retired to a little grotto which she had built, with her brother's aid, in their small garden, and there passed her nights in solitude and prayer. Overcoming the opposition of her parents, and with the consent of her confessor, she was allowed later to become practically a recluse in this cell, save for her visits to the Blessed Sacrament.
In her twentieth year she received the habit of St. Dominic. Thereafter she redoubled the severity and variety of her penances to a heroic degree, wearing constantly a metal spiked crown, concealed by roses, and an iron chain about her waist. Days passed without food, save a draught of gall mixed with bitter herbs. When she could no longer stand, she sought repose on a bed constructed by herself, of broken glass, stone, potsherds, and thorns. She admitted that the thought of lying down on it made her tremble with dread. Fourteen years this martyrdom of her body continued without relaxation, but not without consolation. Our Lord revealed Himself to her frequently, flooding her soul with such inexpressible peace and joy as to leave her in ecstasy for hours. At these times she offered to Him all her mortifications and penances in expiation for offences against His Divine Majesty, for the idolatry of her country, for the conversion of sinners, and for the souls in Purgatory. Many miracles followed her death. She was beatified by Clement IX, in 1667, and canonized in 1671 by Clement X, the first American to be so honoured. Her feast is celebrated 30 August. She is represented wearing a crown of roses. Text shared from The Catholic Encyclopedia