Saint August 24 : St. Bartholomew or Nathaniel an Apostle whom Jesus said was a True Israelite and Patron of Nerves, Bookbinders and Cobblers 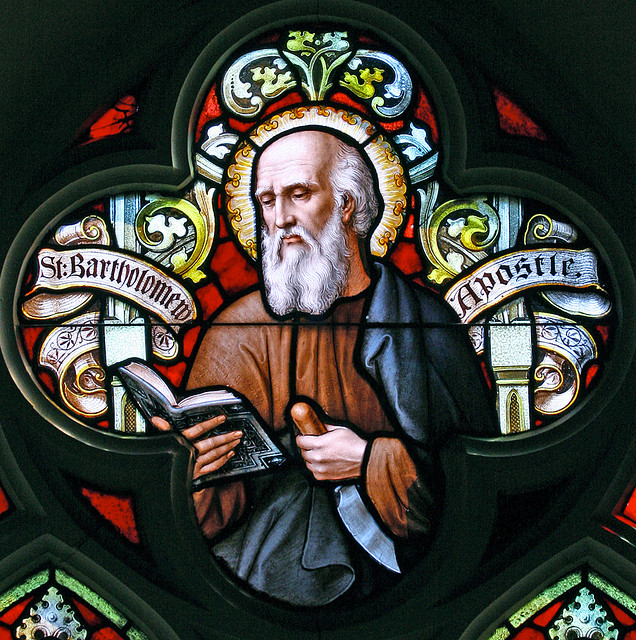 One of the Twelve Apostles, mentioned sixth in the three Gospel lists (Matthew 10:3; Mark 3:18; Luke 6:14), and seventh in the list of Acts (1:13).The name (Bartholomaios) means "son of Talmai" (or Tholmai) which was an ancient Hebrew name, borne, e.g. by the King of Gessur whose daughter was a wife of David (2 Samuel 3:3). It shows, at least, that Bartholomew was of Hebrew descent; it may have been his genuine proper name or simply added to distinguish him as the son of Talmai. Outside the instances referred to, no other mention of the name occurs in the New Testament.Nothing further is known of him for certain.
SEE ALSO:

Many scholars, however, identify him with Nathaniel (John 1:45-51; 21:2). The reasons for this are that Bartholomew is not the proper name of the Apostle; that the name never occurs in the Fourth Gospel, while Nathaniel is not mentioned in the synoptics; that Bartholomew's name is coupled with Philip's in the lists of Matthew and Luke, and found next to it in Mark, which agrees well with the fact shown by St. John that Philip was an old friend of Nathaniel's and brought him to Jesus; that the call of Nathaniel, mentioned with the call of several Apostles, seems to mark him for the apostolate, especially since the rather full and beautiful narrative leads one to expect some important development; that Nathaniel was of Galilee where Jesus found most, if not all, of the Twelve; finally, that on the occasion of the appearance of the risen Savior on the shore of the Sea of Tiberias, Nathaniel is found present, together with several Apostles who are named and two unnamed Disciples who were, almost certainly, likewise Apostles (the word "apostle" not occurring in the Fourth Gospel and "disciple" of Jesus ordinarily meaning Apostle) and so, presumably, was one of the Twelve.
In the bible,  when Jesus saw Nathanael approaching,  He said of him,  “Here is a true Israelite,  in whom there is no deceit. ” “How do You know me? ” Nathanael asked.  Jesus replied,  “Before Philip called you,  I saw you under the fig tree. ”
“Rabbi, ” Nathanael answered,  “You are the Son of God!  You are the King of Israel! ”
Jesus said to him,  “Do you believe just because I told you I saw you under the fig tree?  You will see greater things than these. ” Then He declared,  “Truly,  truly,  I tell you,  you will all see heaven open and the angels of God ascending and descending on the Son of Man. ”
This chain of circumstantial evidence is ingenious and pretty strong; the weak link is that, after all, Nathaniel may have been another personage in whom, for some reason, the author of the Fourth Gospel may have been particularly interested, as he was in Nicodemus, who is likewise not named in the synoptics.No mention of St. Bartholomew occurs in ecclesiastical literature before Eusebius, who mentions that Pantaenus, the master of Origen, while evangelizing India, was told that the Apostle had preached there before him and had given to his converts the Gospel of St. Matthew written in Hebrew, which was still treasured by the Church. "India" was a name covering a very wide area, including even Arabia Felix. Other traditions represent St. Bartholomew as preaching in Mesopotamia, Persia, Egypt, Armenia, Lycaonia, Phrygia, and on the shores of the Black Sea; one legend, it is interesting to note, identifies him with Nathaniel.The manner of his death, said to have occurred at Albanopolis in Armenia, is equally uncertain; according to some, he was beheaded, according to others, flayed alive and crucified, head downward, by order of Astyages, for having converted his brother, Polymius, King of Armenia. On account of this latter legend, he is often represented in art (e.g. in Michelangelo's Last Judgment) as flayed and holding in his hand his own skin. His relics are thought by some to be preserved in the church of St. Bartholomew-in-the-Island, at Rome. His feast is celebrated on 24 August. An apocryphal gospel of Bartholomew existed in the early ages. Text from The Catholic Encyclopedia with Biblical Excerpt