Saint August 30 : St. Fiacre a Priest who was Known for Miracles - who Pointed his Crosier at the Earth and it was Ploughed - Patron of Gardeners, Herbalists 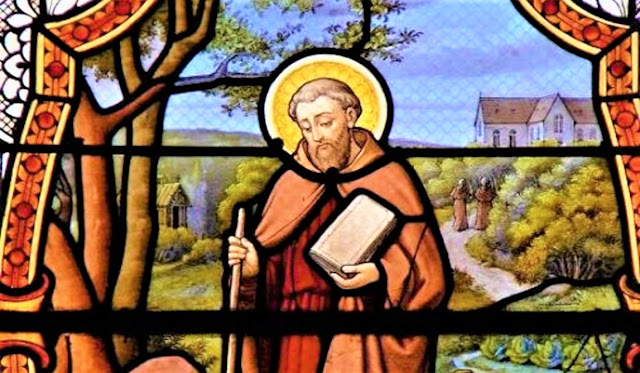 St. Fiacre
Patron Saint of: gardeners; herbalists; florists, cab drivers, victims of hemorrhoids and venereal diseases; Saint-Fiacre, Seine-et-Marne, France
Prayer: Dear God our Father, Giver of all good, we lift up our hearts to You in thanksgiving for who You are and for the power and majesty You manifest in the earth. We thank You for the sun, the rain, and the abundant fruits, flowers, vegetables and herbs You cause to spring forth in our gardens, fields, and flowerports, all signs of Your never-ending love. Through the intercession of Saint Fiacre, patron of gardeners, please bless our fields and gardens with Your verdant blessings. Give us the strength and wisdom to tend our plants and all living things with care, diligence, and joy. May we bring forth a good harvest in due season. In Jesus' name. Amen.
Abbot, born in Ireland about the end of the sixth century; died 18 August, 670. Having been ordained priest, he retired to a hermitage on the banks of the Nore of which the townland Kilfiachra, or Kilfera, County Kilkenny, still preserves the memory. Disciples flocked to him, but, desirous of greater solitude, he left his native land and arrived, in 628, at Meaux, where St. Faro then held episcopal sway. He was generously received by Faro, whose kindly feelings were engaged to the Irish monk for blessings which he and his father's house had received from the Irish missionary Columbanus. Faro granted him out of his own patrimony a site at Brogillum (Breuil) surrounded by forests. Here Fiacre built an oratory in honour of the Blessed Virgin Mary, a hospice in which he received strangers, and a cell in which he himself lived apart. He lived a life of great mortification, in prayer, fast, vigil, and the manual labour of the garden. Disciples gathered around him and soon formed a monastery. There is a legend that St. Faro allowed him as much land as he might surround in one day with a furrow; that Fiacre turned up the earth with the point of his crosier, and that an officious woman hastened to tell Faro that he was being beguiled; that Faro coming to the wood recognized that the wonderworker was a man of God and sought his blessing, and that Fiacre henceforth excluded women, on pain of severe bodily infirmity, from the precincts of his monastery. In reality, the exclusion of women was a common rugin the Irish foundations. His fame for miracles was widespread. He cured all manner of diseases by laying on his hands; blindness, polypus, fevers are mentioned, and especially a tumour or fistula since called "le fic de S. Fiacre".
His remains were interred in the church at Breuil, where his sanctity was soon attested by the numerous cures wrought at his tomb. Many churches and oratories have been dedicated to him throughout France. His shrine at Breuil is still a resort for pilgrims with bodily ailments. In 1234 his remains were placed in a shrine by Pierre, Bishop of Meaux, his arm being encased in a separate reliquary. In 1479 the relics of Sts. Fiacre and Kilian were placed in a silver shrine, which was removed in 1568 to the cathedral church at Meaux for safety from the destructive fanaticism of the Calvinists. In 1617 the Bishop of Meaux gave part of the saint's body to the Grand Duke of Tuscany, and in 1637 the shrine was again opened and part of the vertebrae given to Cardinal Richelieu. A mystery play of the fifteenth century celebrates St. Fiacre's life and miracles. St. John of Matha, Louis XIII, and Anne of Austria were among his most famous clients. He is the patron of gardeners. The French cab derives its name from him. The Hôtel de St-Fiacre, in the Rue St-Martin, Paris, in the middle of the seventeenth century first let these coaches on hire. The sign of the inn was an image of the saint, and the coaches in time came to be called by his name. His feast is kept on the 30th of August.
Source: The Catholic Encyclopedia