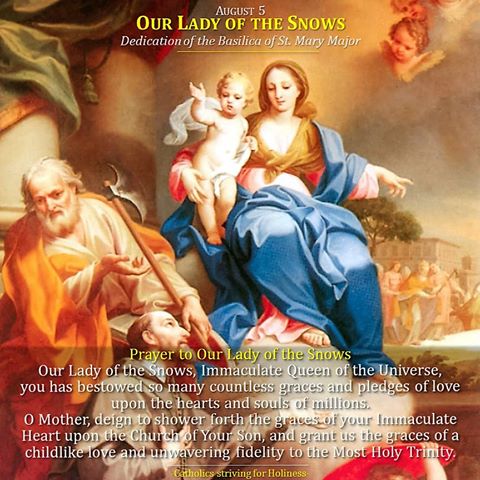 A feast celebrated on 5 August to commemorate the dedication of the church of Santa Maria Maggiore on the Esquiline Hill in Rome. The church was originally built by Pope Liberius (352-366) and was called after him "Basilica Liberii" or "Liberiana". It was restored by Pope Sixtus III (432-440) and dedicated to Our Lady. From that time on it was known as "Basilica S. Mariæ" or "Mariæ Majoris"; since the seventh century it was known also as "Maria ad Præsepe". The appellation "ad Nives" (of the snow) originated a few hundred years later, as did also the legend which gave this name to the church. The legend runs thus: During the pontificate of Liberius, the Roman patrician John and his wife, who were without heirs, made a vow to donate their possessions to Our lady. They prayed to her that she might make known to them in what manner they were to dispose of their property in her honour. On 5 August, during the night, snow fell on the summit of the Esquiline Hill and, in obedience to a vision which they had the same night, they built a) basilica, in honour of Our Lady, on the spot which was covered with snow. From the fact that no mention whatever is made of this alleged miracle until a few hundred years later, not even by Sixtus III in his eight-lined dedicatory inscription [edited by de Rossi, "Inscript. Christ.", II, I (Rome, 1888), 71; Grisar (who has failed to authenticate the alleged miracle), "Analecta Romana", I (Rome, 1900), 77; Duchesne, "Liber Pontificalis", I (Paris, 1886), 235; Marucchi, "Eléments d'archéologie chrétienne", III (Paris and Rome, 1902), 155, etc.] it would seem that the legend has no historical basis. Originally the feast was celebrated only at Sta Maria Maggiore; in the fourteenth century it was extended to all the churches of Rome and finally it was made a universal feast by Pius V. Clement VIII raised it from a feast of double rite to double major. The mass is the common one for feasts of the Blessed Virgin; the office is also the common one of the Bl. Virgin, with the exception of the second Nocturn, which is an account of the alleged miracle. The congregation, which Benedict XIV instituted for the reform of the Breviary in 1741, proposed that the reading of the legend be struck from the Office and that the feast should again receive its original name, "Dedicatio Sanctæ Mariæ". Text from the Catholic Encyclopedia