A Social Media storm continues after the Atlantic published an article saying that the rosary is symbol of violent extremism.      On August 15th, The Atlantic magazine published an article that suggested the rosary has become a symbol of radical extremism in the United States. The article caused many Catholics to worry that this is anti-Catholic bigotry. The magazine later changed the article’s headline from "How the Rosary Became an Extremist Symbol" to "How Extremist Gun Culture is Trying to Co-Opt the Rosary." An image of bullets forming the shape of rosary was changed for a picture of a rosary. 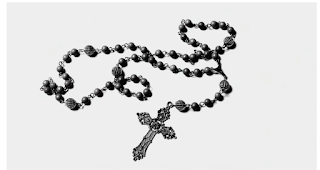 They write:
"Just as the AR-15 rifle has become a sacred object for Christian nationalists in general, the rosary has acquired a militaristic meaning for radical-traditional (or “rad trad”) Catholics. On this extremist fringe, rosary beads have been woven into a conspiratorial politics and absolutist gun culture. These armed radical traditionalists have taken up a spiritual notion that the rosary can be a weapon in the fight against evil and turned it into something dangerously literal. Their social-media pages are saturated with images of rosaries draped over firearms, warriors in prayer..."
Here is a sampling of some of the Social Media reactions:


TIL that I joined an extremist group.

There is one entity that REALLY REALLY has a problem with the rosary.
And trust me, you don't want to be on his team. pic.twitter.com/CBLQBmbgpK

The Atlantic is having convulsions over here with how fast they keep changing the headline of their bigoted Rosary attack article. The latest edition also dropped the disgraceful 'bullethole rosary' graphic pic.twitter.com/rpCFFAUFmF

A holy rosary is NOT an extremist symbol