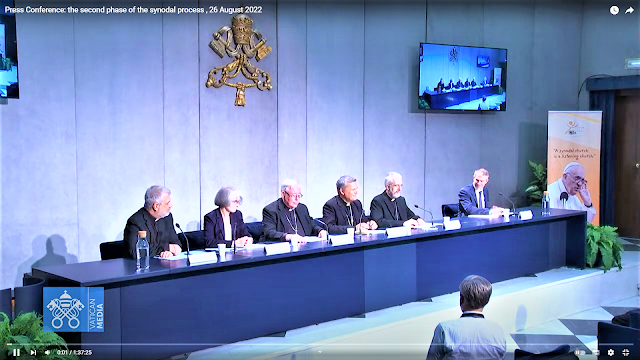 Press Conference to present the second stage of the synodal process: the Continental Phase of the Synod on Synodality, on the theme "For a synodal Church: communion, participation and mission", 08.26.2022

The Continental Stage in Oceania
The vast continent of Oceania is situated within the blue Pacific. It is a very diverse group of countries from small island states to large land masses such as Australia. There is wide variance in levels of wealth and development across the region. For all countries, but particularly the small island states, the impact of climate change is an existential threat, and preoccupies the political and ecclesial discourse. Rising sea levels threaten the very existence of the small island states. And like all other continents, there has been significant impact on lives and livelihoods, as well as church life, caused by the COVID-19 pandemic.
The current President of the Federation of Catholic Bishops Conferences of Oceania (FCBCO) is Archbishop Peter Loy Chong of Suva. The FCBCO comprises four Episcopal conferences – Papua New Guinea and the Solomon Islands; Episcopal Conferences of the Pacific (CE PAC); New Zealand; and Australia. Abp Loy Chong has overseen a two-year process of planning for a FCBCO Assembly in Suva from February 5 – 7, 2023. This is a meeting to which all Bishops in Oceania are invited. It provides the opportunity for them to reflect in depth on matters of direct relevance to the region, as well as an opportunity for episcopal reflection on the discernment for the Continental Phase in Oceania.
For the foundation of the discernment for the Continental Stage in Oceania, an ecclesial process has been proposed which will begin within the four episcopal conferences in the period November to December 2022 with the inclusion of all the baptised. It is a matter for each episcopal conference to determine exactly what process they will use, although they will operate with the support of an Oceania Synodal Taskforce comprised of local people and one person representing the Synod of Bishops. It is likely that most of the spiritual conversations will take place virtually given the time, funding and logistical constraints. However, there is now a wealth of experience amongst the People of God from the listening and dialogue of Stage One in particular Churches, and this can be readily built upon – mindful that we want to reach those who were not included in the first stage.
A representative group from each episcopal conference will join together in-person as a Discernment and Writing Group in January 2023 to take the fruits of the ecclesial reflection from within individual episcopal conferences and combine them into a document for the consideration of the bishops at the Suva Assembly in February. The reflections from the bishops will then be drawn into a final document for the approval of the FCBCO.
There is already an impetus for a more synodal way of being Church which can be seen in the documents released to date from Oceania – those from Australia and New Zealand. The unique characteristic of the Pacific region mean that there will be richness in the diversity of the many ethnic and language groupings across the Pacific as well as from the Maori people of New Zealand, and the First Nations People of Australia. In addition, we are migrant countries, and this adds to the fullness of ecclesial life.
By way of background, some of the significant events in the region recently have been:
- The Second Assembly and finalisation of the Plenary Council for the Church in Australia. The Acts from the Plenary Council will be formally presented to the November meeting of the Australian Catholic Bishops Conference (ACBC) and then presented to the Pope.
- Elections in Australia where a Centre-left party (the Labor Party) replaced a centre-right coalition; as well as in Papua New Guinea (PNG) where James Marape was returned as Prime Minister leading coalition parties.
- Geopolitical tensions in the region, with an increasing interest by world powers in the Pacific.
- A growing recognition of the rights and dignity of Indigenous peoples. E.g. Australia is moving toward a referendum on enshrining an Indigenous voice to Parliament.
Some of the challenges in the region are:
- For a second discernment stage in the Southern Hemisphere, this is a difficult time as we have Summer holidays in January, there is a pre-arranged FCBCO Episcopal Assembly, so it is difficult to ensure people are available without careful planning. This is being undertaken.
- There are significant logistical challenges – great distances; limited numbers of flights; costs of travel (especially for the poorer countries); funding.
- We are now emerging from a Winter in the Southern Hemisphere where the Omicron variant of COVID-19 stretched hospitals to the limit, and there was a significant loss of life, and impact on family, ecclesial and commercial affairs.
- Particularly for the small island states and the remote regions of Australia there are difficulties with connection to a full suite of digital connections.
- As noted above, rising sea levels and unprecedented flooding and fire events, are highlighting the needs identified in both Laudato Si and Fratelli Tutti, especially the uneven impact on the poor and vulnerable.
Source: https://press.vatican.va/content/salastampa/it/bollettino/pubblico/2022/08/26/0620/01245.html