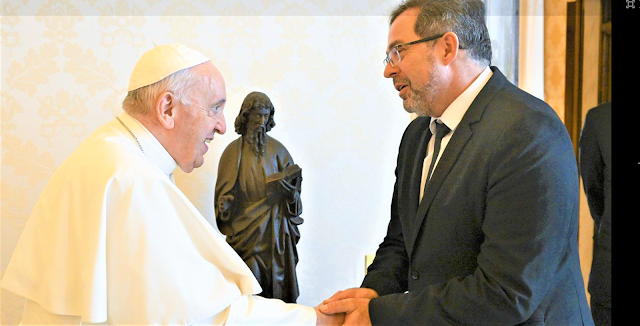 On Saturday, August 6, 2022, Pope Francis received the Ambassador Extraordinary and Plenipotentiary of Ukraine to the Holy See Andriy Yuras in the Apostolic Palace in the Vatican. This was the second meeting after His Excellency Andriy Yuraš, who was appointed to this position on December 14 last year, officially began his mission by handing over credentials on April 7.

The Pope asked him about his son, who is fighting in the war. How is your son? Andriy responded: Good, thank God. He is well.

The Pope has publicly indicated his desire to travel to Ukraine soon. On Twitter, the ambassador said Pope Francis shared his desire to express his closeness to the Ukrainian people with a visit, and that the country hopes to welcome him before his trip to Kazakhstan in mid-September.

Last month, he told Rome Reports that a papal trip to Ukraine was already in the works.

Andriy said, "It's not just a formal gesture, it's a real gesture of support. It's a real gesture of understanding."  Ambassador Yurash says he hopes the Pope will go to Ukraine soon so that he can share what he sees in the war-torn country with the world's religious leaders, with whom he will meet in Kazakhstan next month.