Wow INSIDE the Basilica of the Holy Cross of Rome that Contains Relics of Jesus' Passion Brought by St. Helena and it's Floor is Covered with Soil from Jerusalem! 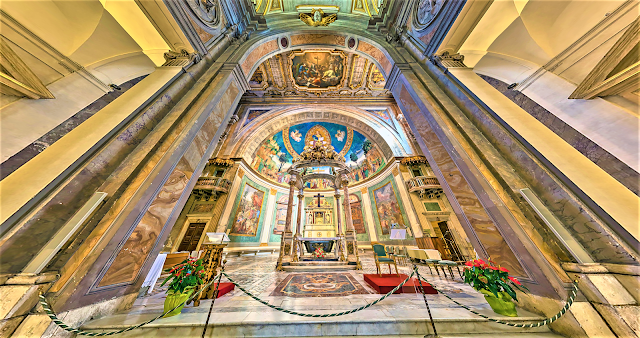 The Basilica of the Holy Cross in Jerusalem or Basilica di Santa Croce in Gerusalemme, (Latin: Basilica Sanctae Crucis in Hierusalem) is a Catholic Minor basilica and titular church in rione Esquilino, Rome, Italy. It is one of the Seven Pilgrim Churches of Rome. According to Christian tradition, the basilica was consecrated circa 325 to house the relics of the Passion of Jesus Christ brought to Rome from the Holy Land by Empress Helena, mother of Roman Emperor Constantine I.

The basilica's floor was covered with soil from Jerusalem, thus acquiring the title in Hierusalem.

Helen (248- 329 AD) was the mother of Constantine I ( Emperor in 306). He gave her the title of Augusta, ( i.e. Empress). In the year 324, when his son moved the capital of the Empire to Constantinople, she was given the opportunity to live in the Palatium Sessorianum, which then became her exclusive residence. In 327- 328 A.D. Helen undertook a pilgrimage to the Holy Land to visit the places of the Passion of Christ; during this trip, as the historian Eusebius says, she became involved in numerous acts of Christian piety and construction of churches and she rescued the relics of the Cross of Jesus.

History and legend mingle in the story of this miraculous discovery: from the Legenda Aurea by Jacopo da Varagine (XIII century), we learn how Helen rescued more than a cross on Golgotha and to recognize the one belonged to Jesus she put in contact with the wood a deceased man who, touching the True Cross, was resurrected.

Once in Rome the Empress adapted part of the Palatium Sessorianum as a chapel to host the relics(it was the first nucleus of the actual chapel of Saint Helen) and later was added a baptistery to this small room. The chapel has been modified several times over the centuries, In the XVI century the vault was decorated with a beautiful golden mosaic, made from a sketch by Baldassarre Peruzzi and showing at the center a very rare example of Smiling Christ in the act of blessing. 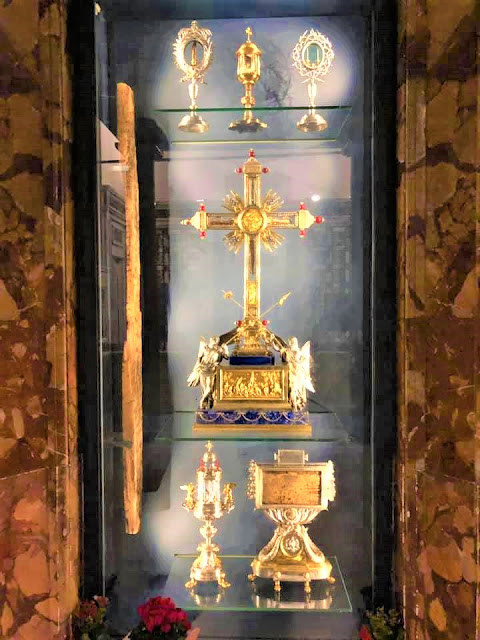 Here, in reliquaries, are treasured relics from Jesus’ crucifixion. St. Helena commissioned an archeological dig to find the hill where Jesus was crucified and the tomb where he was buried. Modern analyses confirm the dating of these relics, recovered in the 4th century. On the bottom right is the sign that Pilate had written and nailed to the cross ‘Jesus of Nazareth, King of the Jews’, written in Latin Greek and Hebrew. On the bottom left is a nail from Jesus’ crucifixion. In the arms of the cross at the centre are fragments of the true cross on which Jesus was crucified (a large piece of the cross hangs on the left side of the case). In the reliquary at the top right are thorns from the crown of thorns; top centre are fragments from the earth in Jesus’ tomb; and top left are the remains of the finger of St. Thomas (called ‘doubting Thomas’), meaning that finger was placed in the side of the Risen Jesus. Amazing!
Source: https://www.santacroceroma.it/en/features-3/sant-elena.html