Wow LISTEN to a Heavenly Childrens' Choir Sing Biebl's Ave Maria Inside a Historic Church - It Will Touch Your Soul! 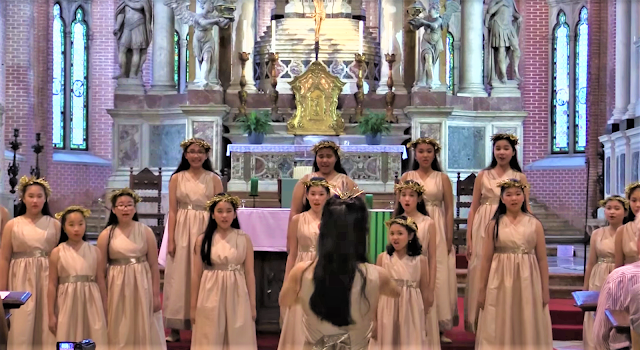 The "Ave Maria" is a prayer to the Blessed Virgin Mary, Mother of Jesus, derived from the New Testament; the Gospel of Luke. This video has had over 100K Views and is one of the most famous Ave Maria's sung in the World.
LISTEN to this breathtaking Ave Maria, composed by Franz Biebl (1906-2001), by the Resonanz Children's Choir, Indonesia.

This performance was conducted by Devi Fransisca with solo by Alicia K. Hartono.

In 1964, a German fireman asked Franz Biebl, his church organist, to write a piece for the men’s choir at the firehouse. Biebl composed the song, and the men’s choir sang it, and it was forgotten. A few years later, when Biebl was the head of choral programs for the Bayerischen Rundfunk, he invited American choirs to come to Munich and sing on the radio with other German choirs. One of these choirs was introduced to his Ave Maria and brought it back to the US, where it became increasingly popular. Later, Chanticleer recorded it and it became a worldwide hit.

Ave Maria of Franz Bibel, written in 1964, is one of the most beautiful works for double choir and engaging works composed in the 20th century. The lyric tenderness and the rich chordal texture of his Ave Maria are set in a contemplative fashion. (Source: Youtube linked above)