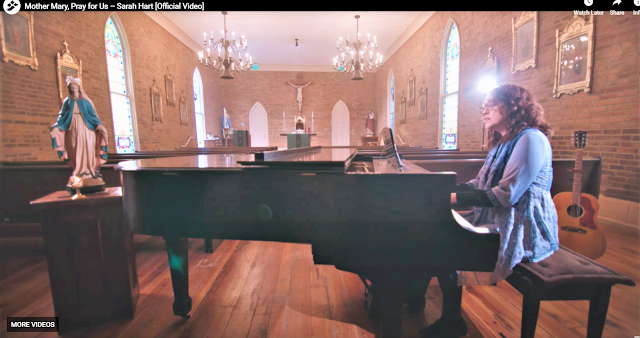 Sarah Hart, a Grammy nominated Catholic musician releases her first Marian hymn. Over years of balancing a family and multi-faceted musical career, Hart's become a seasoned and grateful juggler, with a list of accomplishments.
Amy Grant, Celtic Woman, Matt Maher, Laura Story, Audrey Assad and The Newsboys are among those who’ve recorded her songs, and Grant's recording of "Better Than a Hallelujah" earned Hart a Best Gospel Song Grammy nomination. She has also had several song placements in film and television, and her songs appear in hymnals all across the world. Her new song, “Mother Mary, Pray For Us,” is a beautiful liturgical hynn that’s already available for ministries to use in worship. Hart continues to hit the road steadily, too, helming concerts, keynoting and speaking, leading faith-focused women's, musician's and parish events, and performing from coast to coast and abroad. In October of 2013, Sarah was invited to perform for Pope Francis and a crowd of 150,000 in St. Peter's Square. Sarah has of late seen the premiere of her first musical, Bernadette of Lourdes, based on the life of Saint Bernadette. This latest hymn is available for music ministers through Oregon Catholic Press (OCP). The sheet music is available for piano and guitar, which gives parish ministries. Visit Oregon Catholic Press : https://www.ocp.org/en-us/songs/90714/mother-mary-pray-for-us
Sources: https://www.sarahhart.com/biography