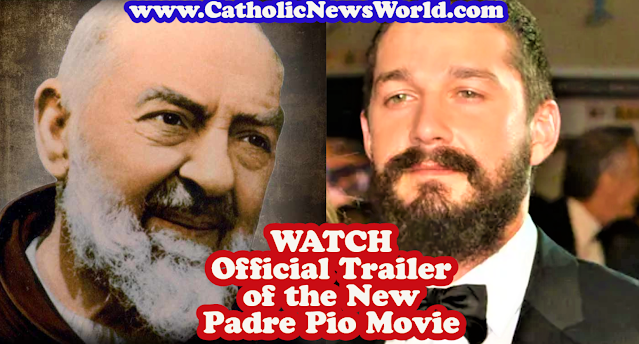 The new film, "Padre Pio," which stars Shia LaBeouf, will premiere at the Venice Film Festival. The film tells the story of Saint Padre Pio, a mystic Capuchin monk. He became well known for his “stigmata” wounds of Christ. Padre Pio bled from his hands, feet and sides. The Saint died in 1968 and was canonized in 2002 by St. John Paul II. He is one of the most popular saints in Italy, and the U.S. . The film takes as its starting point Padre Pio’s arrival at a Capuchin monastery in San Giovanni Rotondo, a poor town in southern Italy, as soldiers were returning home from World War I.
Actor Shia LaBeouf recently was interviewed by Bishop Robert Barron explaining that making the film has brought him to embrace the Catholic faith.
During the film Shia LaBeouf uses the F-word (See Clip where Actor playing Pio swears: https://www.youtube.com/watch?v=nDBUSmQ4B_8) towards a woman in confession. In his interview with Bishop Barron he explains that the monks said that Padre Pio would swear at times however, it is unclear whether the Italian words he used were the same as the F-word.
WATCH the Official Trailer for the Padre Pio Movie below: