25th Anniversary of the Death of St. Mother Teresa of Calcutta - 10 Ways She Changed the World! 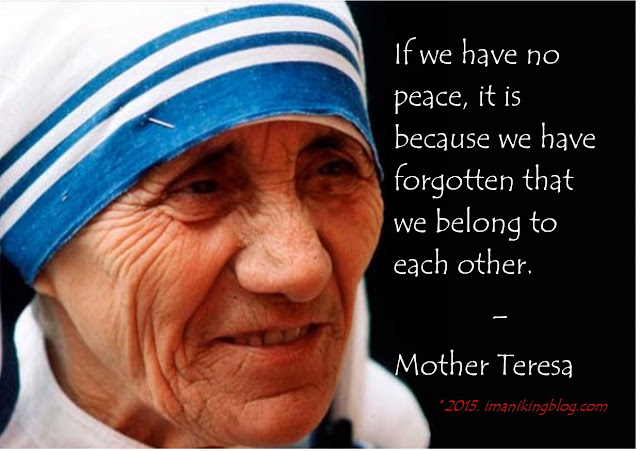 St. Mother Teresa has touched the hearts of Millions around the world with her love....
Saint Mother Teresa's real name was Agnes Gonxha Bojaxhiu and she was born Aug. 26, 1910, in Macedonia. Agnes' father died when she was 8.  When she was 18, Agnes left home and joined the Sisters of Loreto in Ireland. Agnes never saw her mother or sister again after she left for Ireland.  Sister Teresa transferred to the Sisters of Loreto convent in Darjeeling, India.  Sr. Teresa took her vows in 1931, and choose the name Teresa to honor Saints Therese of Lisieux and Teresa of Avila.  She taught for  for 15 years with the Sisters of Loreto. In 1946 Teresa traveled to Darjeeling for a retreat. Mother Teresa was Canonized a Saint on September 4, 2016. It was 25 years ago that she died in 1997.
1. Mother Teresa obeyed the voice of God: “I heard the call to give up all and follow Christ into the slums to serve him among the poorest of the poor.” She obtianed permission from the Sisters of Loreto to leave the order – permission of the Archbishop of Calcutta to live and work among the poor. She also prepared by taking a nursing course.
2. In 1948 Sister Teresa changed her nun’s habit – using a simple sari and sandals worn by the poor women. She moved to the slums to begin her work. She obtained food and supplies by begging.
3. She taught the children of the poor to read and write by writing in the dirt with sticks. She also taught the children basic hygiene. She visited families, finding their needs and helped them with supplies.
4.In 1950 she started the Mission of Charity. This congregation is dedicated to caring for “the hungry, the naked, the homeless, the crippled, the blind, the lepers, all those people who feel unwanted, unloved, uncared for throughout society, people that have become a burden to the society and are shunned by everyone.”
5. Mother Teresa opened hospices for the poor, a home for sufferers of leprosy, and a home for orphans and homeless youths.
6. Mother Teresa's Sisters spend 1 hour in adoration of the Blessed Sacrament each day.Their day begins with prayer and Mass where they encounter Jesus the source of their strength.
7 . Mother Teresa was honored with many awards throughout her life, from the Indian Padma Shri in 1962 to the inaugural Pope John XXIII Peace Prize in 1971  most famously, the Nobel Peace Prize in 1979.
8. She refused the traditional Nobel honor banquet, instead requesting that the $192,000 budget be given to help the poor of India.  She continued her work with the poor for the rest of her life, leading the Missionaries of Charity until just months before her death Sept. 5, 1997.
9. Her Sisters have hundreds of houses throughout the world. They have helped millions of people.
10. Saint Mother Teresa was Officially Canonized as a Saint by Pope Francis on Sept. 4, 2016.