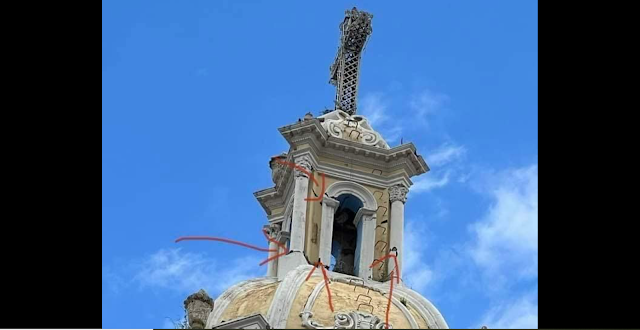 A 7.6-magnitude earthquake occurred on Monday, September 19, in Mexico, has caused damage to 8 Catholic Churches. Aljazeera reports that there have been 2 fatalities and 200 buildings damaged.The Facebook page " Diocese of Zamora, Michoacán: history, art and tradition ", indicated that the earthquake that occurred at 1:05 p.m. (local time), and affected several places of worship but did not claim the lives of the faithful.
"Let us be willing to support our parishes in repairing the damage suffered, for the well-being and safety of the faithful who come to these venues, and for their greater decorum," they exhorted.
Below is a list of parishes affected:
-The Apóstol Santiago Parish, located in Tangamandapio, suffered a crack in the façade.
-In the San Miguel Arcángel Parish in Tacátzcuaro, the façade partially collapsed.
-The side entrance of the San José Chapel, in Cotija, was also affected.
-In the San Francisco de Asís Parish, in Corupo, the interior ceiling of the temple partially collapsed.
-In the parish of San Francisco de Asís, in Zamora, the quarry cross of the tower cracked,
-Some pieces fell from the interior quarry and from the threshold of the Parroquia de Santiago Apóstol, in Sahuayo.
-Detachment of cement blocks on the presbytery and the nave, as well as cracks inside the parish of San Pedro Apóstol, in the town of Paracho.
-Some cracks appeared in the towers of the Sanctuary of the Lord of Miracles, in San Juan Nuevo, which caused the local priests to close the access through the main door of the temple.
On Monday, September 19, a 7.6 magnitude earthquake occurred at 1:05 pm (local time) with an epicenter 63 kilometers from the town of Coalcomán, in the state of Michoacán.

The earthquake, which was felt in other parts of the country such as Mexico City, occurred on the anniversary of two other major earthquakes in 1985 and 2017, which claimed the lives of many people.