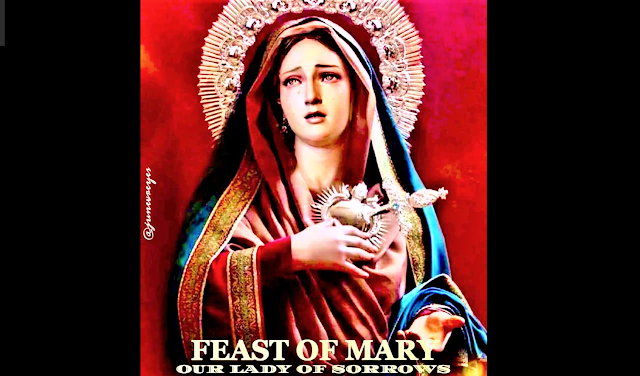 The Feast of Our Lady of Sorrows remembers how Mary suffered with Jesus. It is celebrated on the octave of the nativity of Mary. The object of these feasts is the spiritual martyrdom of the Mother of God and her compassion with the sufferings of her Divine Son. In the bible, the Gospel of St. Luke, chapter 2 verse 34-35, it says, "Then Simeon blessed them and said to His mother Mary: “Behold, this Child is appointed to cause the rise and fall of many in Israel, and to be a sign that will be spoken against, and a sword will pierce your soul as well so that the thoughts of many hearts will be revealed.” Here we find the original prophecy of Mary's sorrow in scripture. There are seven traditional sorrows of Mary: the sorrow at the prophecy of Simeon; at the flight into Egypt; having lost the Holy Child at Jerusalem; meeting Jesus on his way to Calvary; standing at the foot of the Cross; Jesus being taken from the Cross; at the burial of Christ.

The seven founders of the Servite Order, in 1239, five years after they established themselves on Monte Senario, took up the sorrows of Mary, standing under the Cross, as the principal devotion of their order. 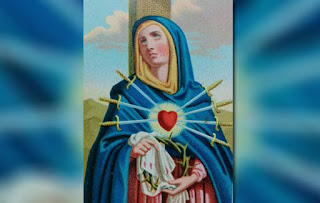 The corresponding feast, however, did not originate with them; its celebration was enacted by a provincial synod of Cologne (1413) to expiate the crimes of the iconoclast Hussites; it was to be kept on the Friday after the third Sunday after Easter under the title: "Commemoratio augustix et doloris B. Marix V.". Its object was exclusively the sorrow of Mary during the Crucifixion and Death of Christ. Before the sixteenth century this feast was limited to the dioceses of North Germany, Scandinavia, and Scotland. Being termed "Compassio" or "Transfixio", "Commendatio, Lamentatio B.M.V.", it was kept at a great variety of dates, mostly during Eastertide or shortly after Pentacost, or on some fixed day of a month (18 July, Merseburg; 19 July, Halberstadt, Lxbeck, Meissen; 20 July, Naumberg; cf. Grotefend, "Zeitrechnung", II, 2, 166). Dreves and Blume (Analecta hymnica) have published a large number of rhythmical offices, sequences and hymns for the feast of the Compassion, which show that from the end of the fifteenth century in several dioceses the scope of this feast was widened to commemorate either five dolours, from the imprisonment to the burial of Christ, or seven dolours, extending over the entire life of Mary (cf. XXIV, 122-53; VIII, 51 sq.; X, 79 sq., etc.). Towards the end of the end of the sixteenth century the feast spread over part of the south of Europe; in 1506 it was granted to the nuns of the Annunciation under the title "Spasmi B.M.V.", Monday after Passion Sunday; in 1600 to the Servite nuns of Valencia, "B.M.V. sub pede Crucis", Friday before Palm Sunday. After 1600 it became popular in France and was termed "Dominx N. de Pietate", Friday before Palm Sunday. To this latter date the feast was assigned for the whole German Empire (1674). By a Decree of 22 April 1727, Benedict XIII extended it to the entire Latin Church, under the title "Septem dolorum B.M.V.", although the Office and Mass retain the original character of the feast, the Compassion of Mary at the foot of the Cross. At both Mass and Office the "Stabat Mater" of Giacopone da Todi (1306) is sung.
(2) The second feast was granted to the Servites, 9 June and 15 September, 1668, double with an octave for the third Sunday in September. Its object of the seven dolours of Mary (according to the responsories of Matins: the sorrow
at the prophecy of Simeon;
at the flight into Egypt;
having lost the Holy Child at Jerusalem;
meeting Jesus on his way to Calvary;
standing at the foot of the Cross;
Jesus being taken from the Cross;
at the burial of Christ.
This feast was extended to Spain (1735); to Tuscany (double of the second class with an octave, 1807). After his return from his exile in France Pius VII extended the feast to the Latin Church (18 September, 1814), major double); it was raised to the rank of a double of the second class, 13 May, 1908. The Servites celebrate it as a double of the first class with an octave and a vigil. Also in the Passionate Order, at Florence and Granada (N.S. de las Angustias), its rank is double of the first class with an octave. The hymns which are now used in the Office of this feast were probably composed by the Servite Callisto Palumbella (eighteenth century). On the devotion, cf. Kellner, "Heortology", p. 271. The old title of the "Compassio" is preserved by the Diocese of Hildesheim in a simple feast, Saturday after the octave of Corpus Christi. A feast, "B.M.V. de pietate", with a beautiful medieval office, is kept in honour of the sorrowful mother at Goa in India and Braga in Portugal, on the third Sunday of October; in the ecclesiastical province of Rio de Janeiro in Brazil, last Sunday of May, etc. (cf. the corresponding calendars). A special form of devotion is practised in Spanish-speaking countries under the term of "N.S. de la Soledad", to commemorate the solitude of Mary on Holy Saturday. Its origin goes back to Queen Juana, lamenting the early death of her husband Philip I, King of Spain (1506).
To the oriental churches these feasts are unknown; the Catholic Ruthenians keep a feast of the sorrowful Mother on Friday after the octave of Corpus Christi. Text Source: The Catholic Encyclopedia