Hundreds Attend Annual March for the Martyrs in Washington, DC to “rise up as one voice for the persecuted Church.” 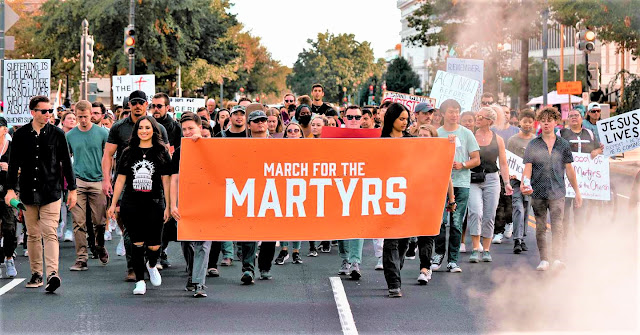 On September 24th, 2022, in Washington, D.C., a large group of people  gathered to give a voice to persecuted Christians at the third Annual March for Martyrs. The annual March for the Martyrs event was attended by hundreds of Christians and believers from across the United States.

Hundreds of people from around the USA gathered on the National Mall on Saturday for the third-annual March for the Martyrs. Religious freedom representatives called on the faithful to learn from those around the world who chose to die rather than renounce their belief in Jesus Christ. (FULL VIDEO at Bottom)
This year's keynote speaker was basketball star Enes Kanter Freedom, a practicing Muslim from Turkey, and NBA veteran.
The event began with live worship music courtesy of John Forystek and speeches from For the Martyrs Founder Gia Chacon, Chaldean Catholic Priest Fr. Simon Esshaki and evangelists Jacob Coyne and Shane Winnings. Participants marched slightly more than a mile from the kickoff rally to the Museum of the Bible, where a night of prayer event was held.

WATCH the FULL Video of the Event Click the Link below: