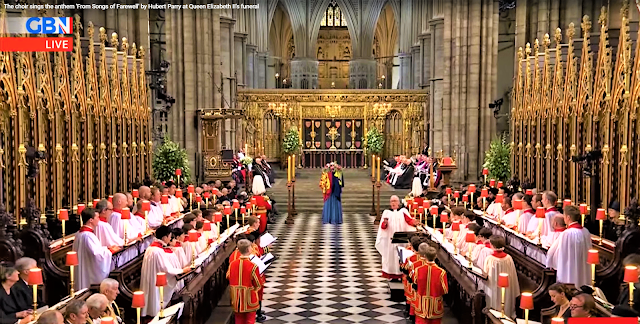 The Choir in Westminster Abbey Sings a Touching 'From Songs of Farewell' by Hubert Parry at Queen Elizabeth II's Funeral. Songs of Farewell is a set of six choral motets by the British composer Hubert Parry. The pieces were composed between 1916 and 1918. The songs were written during the First World War when a number of Parry's students at the Royal College of Music were being killed while on duty. Parry's choice of texts are thought to reflect a desire to escape the violence of a world at war, and to find peace in a heavenly home.
Lyrics My soul, there is a country
Far beyond the stars, Where stands a winged sentry All skillful in the wars: There, above noise and danger Sweet Peace sits crowned with smiles And One, born in a manger Commands the beauteous files. He is thy gracious friend And, O my soul, awake! Did in pure love descend To die here for thy sake. If thou canst get but thither, There grows the flow'r of Peace, The Rose that cannot wither, Thy fortress and thy ease. Leave then thy foolish ranges, For none can thee secure But One who never changes, Thy God, thy life, thy cure. The choir sings the anthem 'From Songs of Farewell' by Hubert Parry following the Archbishop of Canterbury’s sermon at the funeral of Queen Elizabeth II.
Sources: classicfm.com, Musixmatch, Wikipedia, and GB News